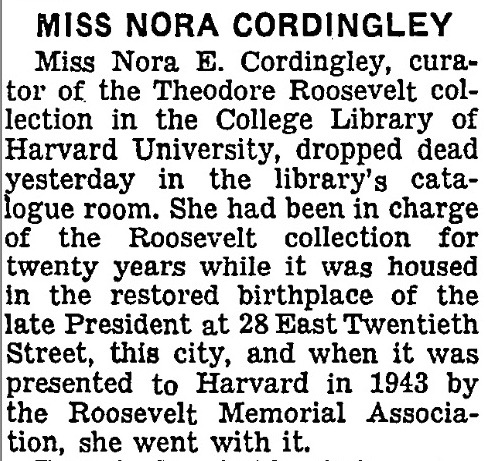 An excerpt from the New York Times obituary that starkly but accurately captured the details of Nora E. Cordingley’s death.

In February 1966, Esquire magazine published an article by Gay Talese called “Mr. Bad News.” The subject of that piece was Alden Whitman, a still-very-much-alive obituary writer for the New York Times. Many obituaries are written months or even years prior to the individual’s death. That’s why one sees a 2000 word overview of someone’s life published literally within the hour after they have passed. March is Women’s History Month. To mark the occasion editors at the Gray Lady have created a series they are calling “Overlooked,” for which they are writing obituaries for prominent women who did not receive recognition in the newspaper when the women originally died. Charlotte Brontë, Emily Warren Roebling and Ida B. Wells are three of the first fifteen subjects. Hopefully this will become something like “The Lives They Lived” section that appears the final Sunday of the year. I would like to see them do some figures from the First World War such as Edith Cavell. They are soliciting potential future articles. For whatever they regard it to be worth, I may submit a few ideas to the Times editors.

I once mentioned in passing here on The Strawfoot a woman named Nora E. Cordingley, a Canadian who worked at Roosevelt House on East 20th Street starting in the 1920s. I knew then that I wanted to expand on her story a bit more but was waiting for the time. That time came a few weeks back when something came through my feeds soliciting articles for the Women of Library History blog. They are currently running their sixth annual series on women who work in the library profession. When I saw the announcement, I knew the time had come and I started working on it right away. The editor and I agreed we should publish the article today. Nora E. Cordingley died on March 14, 1951, 67 years ago today. I am really proud to have written this article. Ms. Cordingley is one of the overlooked people who kept Theodore Roosevelt’s legacy alive and she deserves to be remembered. Read the article here.