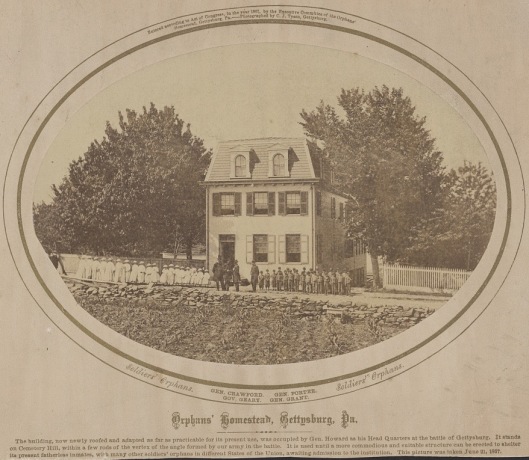 Ulysses S. Grant arrived in Gettysburg on this date in 1867. Grant had been made lieutenant general the year before and, with Andrew Johnson’s presidency increasingly in jeopardy, it was becoming increasingly obvious that Grant might make a feasible run for the White House in 1868. David Wills invited Grant to visit Gettysburg to tour the battlefield and also meet the commissioners of the National Cemetery where Lincoln gave the Gettysburg Address four years earlier.

The photograph we see here was taken by Charles J. Tyson on June 21. Charles and sibling Isaac were the Tyson Brothers who took so many of the iconic images of the battlefield just after the fighting ended. This image was taken with the boys and girls at National Homestead orphanage for Union soldiers on Baltimore. The girls are on the left and the boys on the right. The photo was taken for charity, with proceeds going to fund the orphanage. The children seem to have been selected from many states to increase public interest in the photograph and thus the orphanage itself.

It is difficult to distinguish the four men but based on other versions of the photograph online that zoom more closely on the adults, Grant seems to be second from the right. Grant and his entourage toured the Gettysburg battlefield and cemetery that day. After that, the busy Grant was off to Harrisburg. In an interesting coda, when Grant indeed assumed the presidency two years later, Wills wrote to him asking to be made U.S. minister to Italy.