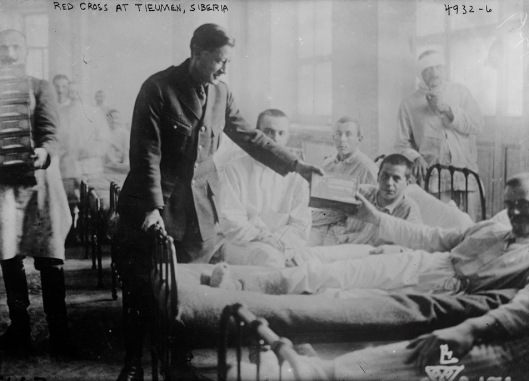 I hope everyone has been enjoying their Thanksgiving. It is a cold one here in Virginia. I wanted to share one more photograph relating to Thanksgiving 1918. The above image was taken in Tieumen, Siberia in those weeks just after the Armistice. As I have said before, it is important to remember that the fighting did not neatly end on November 11. Here we see Red Cross workers passing out parcels, including cigarettes, to the wounded in a hospital ward. The A.E.F.’s involvement in the Siberian campaign is one of the least explored aspects of the Great War. Hopefully someone has been working on that in preparation for the centennial of the war and we will learn more in 2019.

There is an interesting lesson in the provenance of this photograph. Its Library of Congress record says the image was taken on Thanksgiving Day, 20 November. Thanksgiving that year however fell on 28 November. I figured this was a typo and so checked the Catalogue of Official A.E.F. Photographs Taken by the Signal Corps, U.S.A., the source from where the Library of Congress catalogers took the bibliographic record. The thing is, the Signal Corps catalogue lists Thanksgiving as falling on 26 November. I checked the 1918 calendar and the record is obviously wrong; 26 November 1918 is a Tuesday.

I did a little digging but could find nothing more definitive about this Siberian Thanksgiving one hundred years ago. My guess is that both of those second-hand sources are incorrect and the image was taken on Thanksgiving Day itself. Or, they celebrated the holiday on another day for some logistical reason. Whatever the full story–and we alas will probably never know–it is an extraordinary image and testimony to the power and importance of Thanksgiving for Americans wherever they may be.

Wherever you are, enjoy your holiday.