Sara Roosevelt Price Collier married Frederick Charles Fellowes-Gordon, a lieutenant in the British Royal Navy, at St.Thomas’s Church in Washington D.C. on this date in 1918. The two became engaged in mid-November just after the Armistice and were supposed to wed on Saturday December 14 but for reasons that are unclear that did not come to pass. The bride, known as Sallie, was the daughter of Hiram Price Collier, a former minister at First Unitarian Church in Brooklyn and later a writer who died in Copenhagen Denmark in 1913. Sallie’s mother was Katharine Delano Price Collier, Sara Delano Roosevelt’s sister. There to give the bride away was her godfather and cousin, Franklin Delano Roosevelt. 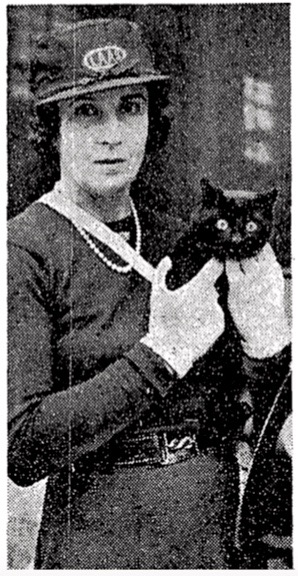 Sara Fellowes-Gordon, misidentified as Mrs. Gordon Fellowes in a 1940 New York Times caption, as she was volunteering with a motor ambulance unit in London during the Second World War. The cat was the unit mascot. Her cousin and godfather Franklin Roosevelt walked her down the aisle at her December 30, 1918 wedding just before he left for Europe.

The wedding plans were necessarily hasty, as the bridegroom was scheduled to return to England within just a few days. Sallie and Charles, as he was usually called, lived primarily in Great Britain after they married, raising a family while Charles rose in the ranks. The maritime connection between the two sides of the family was strong. Franklin loved the sea and, like his uncle Theodore, had served as assistant secretary of the navy; the Fellowes-Gordon clan was long prominent in the Royal Navy. The families remained close. In June 1934, by which time Franklin was president, Sallie and Charles accompanied Sara Delano Roosevelt aboard the Europa to Europe with two of their sons. Later that year, in September, Sallie and Charles were at Hyde Park to celebrate Aunt Sara’s 80th birthday with the extended family.

Both families were obviously active when the Second World War came, though Franklin of course did not live to see the war’s conclusion. Sara Fellowes-Gordon was present at Westminster Abbey on November 12, 1948, thirty years after her wedding and three years after Franklin Delano Roosevelt’s death, to help unveil a plaque in memory of her cousin and godfather. There that day as well were Clement Attlee and Winston Churchill. Eleanor continued seeing the Fellowes-Gordon family well into the 1950s on her many trips abroad. Sara died in 1969 and Charles in 1972. They are buried in Aberdeenshire, Scotland.