The Eagle captured the excitement of the Leviathan’s return while noting signs of the coming difficulty in securing the peace. The Mauretania returned this same day with another 3,500 men from the 27th Division.

A few minutes ago on this rainy Sunday morning I hit send and submitted something that hopefully will appear in an online venue toward the end of the month. I suppose this will give away the topic, but in my research I found these incredible images we see of men from the 27th “New York” Division returning from France 100 years ago this week. Nearly 15,000 of O’Ryan’s Roughnecks returned aboard the Leviathan and Mauretania on March 6, 1919. I always found it extraordinary the way the men packed in to these huge ocean liners by the thousands like this for the voyage home. During the Second World War Dwight Eisenhower and other military officials gave the men the choice of coming home the way the doughboys had a generation earlier, or staggering the launches with more crossings and thus fewer men to make the passage more comfortable. The thing was, that also meant more time in getting everyone back. Eager to get home and move on with their lives, the dogfaces chose the former virtually to a person. 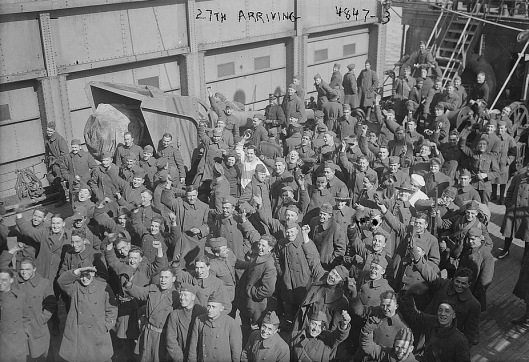 Men of the 27th Division aboard the Leviathan arrive in New York Harbor, March 6, 1919. Arrivals such as this, with ships crammed stem to stern with doughboys, were almost a daily occurrence in winter 1919.

The Leviathan pulls in to New York Harbor on March 6, 1919. Dockworkers returned from strike to ensure the Leviathan and Mauretania’s safe arrival in the city with the men of the 27th.