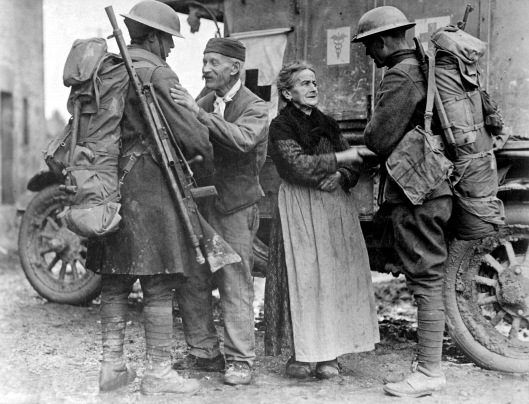 Lieutenant Adrian C. Duff, aka The Camera Kid, took this image of two French peasants greeting a pair of infantrymen of the 77th Division in the final week of the war.

A few moments ago I hit “send” on a piece that should see the light of day in a week or so. I don’t want to give away too many details, but it relates to the 77th Division. In my research I came across this extraordinary image of two infantrymen from “New York’s Own” being welcomed by a French couple. History even remembers the couple’s names; they are Monsieur and Madame Baloux of Brieulles-sur-Bar, France. The image was taken on November 6, 1918 after the town was liberated from German occupation. The photograph was taken by a Lieutenant Adrian C. Duff, who the internet tells us served in the U.S. Signal Corps. I get the impression that Lieutenant Duff probably took many images of American troops on the Texas-Mexico Border during the Punitive Expedition and then in France during the Great War that are part of our iconography of those conflicts. His nickname was “The Camera Kid.” The image first appeared in the February 4, 1919 Albuquerque, New Mexico Evening Herald, on page one no less, adjacent to troubling news from Eastern Europe about the Czechs and Poles.

I wrote the first draft yesterday in a coffee shop in Brooklyn while waiting for a particular store to open. I’m trying to clear the decks of a few small projects like this as spring break winds down and I prepare for the final month of the semester. The next few weeks will be intense, but I’m looking forward to it. Alas I will not get to wear it for about six months and it gets cool again, but yesterday after leaving the coffee shop I headed down to my destination, where I bought a beautiful vintage, grey, tweed, herringbone suit. Being tweed, the suit is by definition less formal; nonetheless, it is quite understated and stunning in detail with patch pockets and a high rise to the trousers. Come fall I’m going to make suits part of my almost-daily arsenal.

Today I’m going to do laundry and prepare for the hectic week ahead. Enjoy your Sunday.