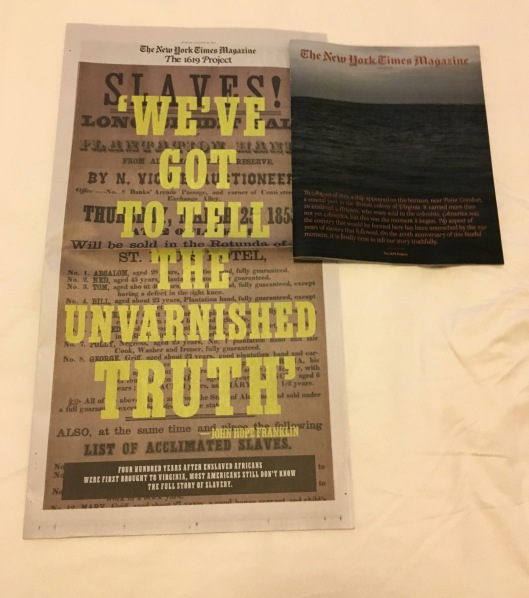 Even before I moved to New York City one of my weekly rituals was buying the Sunday New York Times. I very rarely if ever purchase the hard copy any more because I have a digital subscription via my institution. Still, this morning I went to the local bodega after putting a load in at the laundromat to buy today’s edition. Since starting at Federal Hall in early June I have been reading the social media feeds of certain historians with whom I was unfamiliar until late spring. I have had to do so to expand my knowledge base. This week a few of them have been posting about having articles in today’s Times special section “The 1619 Project.” The special section, actually two sections, chronicles the various ways slavery and its aftermath have touched American society since 1619, the year of the founding of the Jamestown Colony in Virginia. The short answer is that it touched essentially every aspect of American life, in ways one is probably not even always aware. The articles are a place to begin and hardly the last word. They will undoubtedly lead to discussion and further exploration from historians, educators, and those working in fields related to public history.

I have noticed too that “The 1619 Project” has drawn the ire of certain officials and commentators. Personally I have never understood that. One should never look away from the truth, whatever it may be. There is a great deal in various places online about this initiative but if one is interested in a place to start, begin here.