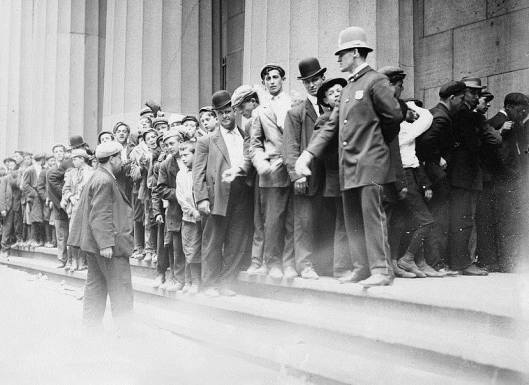 People line up outside the Pine Street entrance of the NYC Sub-Treasury to buy the newly released Lincoln penny, August 2, 1909

The Lincoln penny is one of the most common, perhaps the most common, examples of American material cultural. It is so ubiquitous, such a part of our everyday lives, that we think nothing of it. The Lincoln one cent coin replaced the Indian Head, which had been in circulation for sixty years, from 1859, just prior to the Civil War, until 1909, the centennial of Lincoln’s birth. In the words of one observer writing in the Brooklyn Daily Eagle in August 1909 during the coin’s rollout: “The new cent is a dignified and handsome coin, the head of Lincoln being particularly good and free from suggestion of caricature, which attended so many of the earlier attempts to picture the great but homely President.”

There had been a move for several years under Theodore Roosevelt to improve America’s coinage. Roosevelt believed the United States needed a more dignified, aesthetically pleasing metal currency in line with the nation’s increasing role in world affairs. Roosevelt hired Augustus Saint-Gaudens and others to carry that out. Saint-Gardens created such masterpieces as the Double Eagle. The Lincoln penny was designed by Victor David Brenner, like Saint-Gaudens an immigrant who contributed greatly to our culture. The public demand for the Lincoln penny when it was first issued in August 1909 was intense.

This was the scene at the New York Sub-Treasury (Federal Hall) on August 2, 1909 as people lined up on the steps of the Pine Street entrance. The coins were rationed in New York City and elsewhere as people turned out to get the new issue. The U.S. Mint issued 25 million of the coins, but demand still outstripped supply. In mid-September someone broke into a Long Island post office and stole $5 worth of Lincoln heads. That doesn’t sounds like much but comes to 500 coins. Such stories were, if not common, not exactly unprecedented. Rumors were rampant of people selling them on the black market, if that’s what one wanted to call it, at above face value.