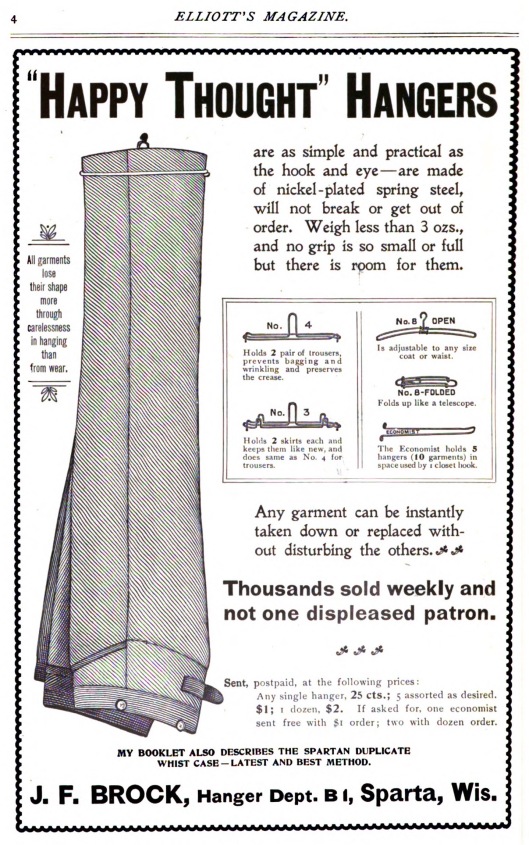 This Sunday morning apropos of nothing I thought I would share this image I came across a few days ago when looking for images to share with our students. It comes from the August 1899 Elliott’s Magazine, which labeled itself “the official organ of the League of American Wheelmen.” No, I did not share this image, but found instead others that were more germane to the class itself. I love this image for two reasons: first off, I love old advertisements in general; and second, call me crazy but I also just love old hangers. Several years ago when I volunteered at a particular Park Service site there was a sturdy, wooden vintage hangar from Abraham & Straus on the clothes rack. I hazard that few who entered even knew what Abraham & Straus but to me it was a small piece of material culture from long ago. Even better, it wasn’t just for show; all these decades lates it was still doing its job: people hung their clothes on it just as the manufacturer intended. How and when did it get there, I always wondered. That people were still using it daily without a second thought was testimony to its being a Well Made Thing.

I love this particular image for a number of reasons. If one looks closely at the pants one will note that they have both side-adjustors and suspender buttons. Last week I dropped some items off at the dry cleaner for the first time in 6+ months. These included two old blankets that went unused over the summer and that I had cleaned in anticipation of fall, and the dress pants and shirts I have worn in recent weeks now that class has begun. I picked up yesterday. Even in the virtual classroom I wear slacks, dress shirt and tie. We’ll see if a coat too makes an appearance once the cooler weather truly arrives.