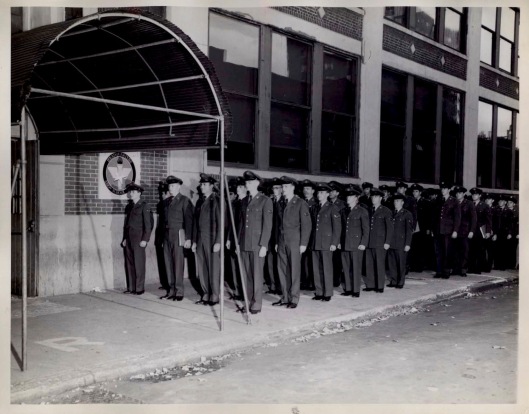 Yesterday morning at work I was going through some boxes of archival images for a presentation tomorrow when I came across these two. These are students at what is now New York City College of Technology in about 1950, when the institution was still known by its original name, the New York State Institute of Applied Arts and Sciences. There was–and still is–a strong veteran presence on campus because we began as a GI Bill school just after the Second World War. This fall I intend to get back to a project about the early years of our college, with a special emphasis on our founder: Benjamin Harrison Namm. I had intended to do it over the summer but the revisions on the latest draft of my Civil War manuscript took longer than I expected.

Namm had been a major in the First World War and returned to run the department store his father founded in Downtown Brooklyn, which he took to new heights. When the Second World War was winding down Namm understood that returning GIs needed the educational benefits and other services not afforded the doughboys of 1917-18 and became determined to do something about it. There was to be no Bonus Army this time around. I’ll leave it at that for now. The dental image is notable because the United States Air Force was one of the leaders in Restorative Dentistry. It was City Tech’s founding provenance that presumably led to the program landing at the school in the late 1940s and early 1950s. And so it remains today. I’ll have more to say on this in the coming weeks.