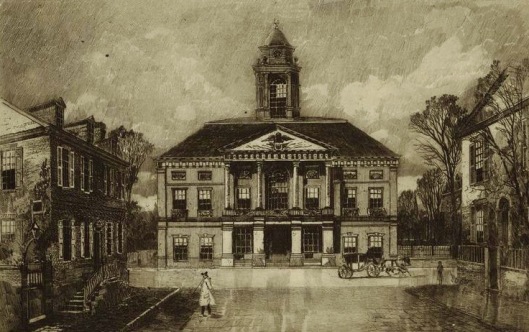 New York City’s Federal Hall as it was around the time of Washington’s first inaugural. Even after the federal government moved to Philadelphia in 1790 this building and property would prove central local and national events.

I hope everyone’s summer is off to a good start. Happy Father’s Day to all dads out there. Posting will pick up here now that the summer days have settled into something of a pattern. With the academic year over I again began volunteering with the Park Service. This summer I am at Federal Hall. Though I never planned it this way, it has been something of a run through the various New York City sites. There is actually a great deal of overlap in the histories of these places, and Federal Hall has a unique story and provenance spanning many centuries. The site itself was placed under the auspices of the Park Service by the Franklin Roosevelt Administration, who did so eighty years ago in 1939 around the same time they quashed Robert Moses’s Brooklyn-Battery Bridge. The Early American Period is an era about which I know fairly little and I have thus spent much of my time since submitting grades Memorial Day Weekend engrossing myself in the literature. I find it comforting on a number of levels, not least as I try to understand our own troubling and disturbing times. The Founding Father have so much to teach us.

The site upon which stood Federal Hall has been many things over time. It was where the First Congress met and where George Washington was sworn in as our first president. The original building was torn down in 1812 and a customs house built on the choice Wall Street property in 1842. During the Civil War it became the New York Sub-Treasury, and would remain so until just after the First World War. A great deal of all this also ties in to my book manuscript, which really excites me. I am already up-and-running, writing some bits for the social media and giving tours. I’m looking forward to telling more stories and jumping in.