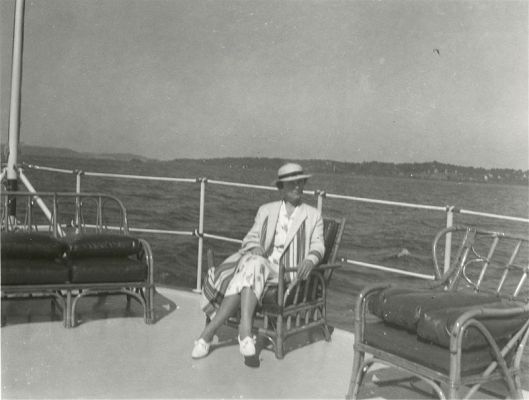 Margaret “Daisy” Suckley aboard the USS Potomac in the Hudson River, 1937. Ms. Suckley was present in Warms Springs, Georgia when Franklin Roosevelt died in April 1945.

Some may remember a year ago March when I wrote about Nora E. Cordingley for the Feminist Task Force of the American Library Association’s Women of Library History page. Cordingley was a librarian at the Roosevelt Memorial Association Library on East 20th Street, working for many years under the direction of Hermann Hagedorn. I knew even at the time that I wanted to write in 2019 for the same venue about Margaret Suckley, a confidante and sixth cousin of Franklin Roosevelt who went to work at the Franklin D. Roosevelt Library in Hyde Park in 1941. Earlier today they posted that piece. I was very happy with how it came out and see the Cordingley and Suckley articles as bookends of one another. These two did such important work and deserve to be remembered.

In a related note, if you live in the Greater New York area, or will be in the city between now and May 31, it is not too late to see “Affectionately, F.D.R.” This exhibit is a display of over one dozen letters written between President Roosevelt and Ms. Suckley over a ten year period between 1934-44. The letters were recently given to Roosevelt House on East 65th Street by a generous couple. None of the letters has ever been on display until this exhibit. Check out the directions and hours here. I have been to scores of events at Roosevelt House over the years and can attest to what a special place it is.

Yesterday a friend and I braved the heat and ventured to Roosevelt Island to visit Four Freedoms State Park, architect Louis Isadore Kahn’s tribute to our only four-term president and the man who gave the world so much of what many people sadly take for granted today. When I got home I finished Jean Edward Smith’s FDR, an outstanding biography I have been reading over the summer in addition to finishing my book manuscript and boning up on my U.S. Grant. (Last week I picked up a brand new hardcover copy of the same author’s Grant for $5 that I will get to in a few weeks.) This morning I have been going through copies of “Gas Attack,” the newspaper published by the 27th “New York” Division during the First World War. The men had published a previous newspaper called the “Rio Grande Rattler” when they were stationed on the Texas/Mexico border during the Punitive Expedition in 1916. The reason I say all this is because in pursuing “Gas Attack” I came across this extraordinary photography that includes Margaret L. Suckley.

Margaret Suckley was a volunteer with the 27th “New York” Division when the unit trained at Camp Wadsworth, South Carolina in 1918. She went on to be a friend and confidant of Franklin D. Roosevelt, whom she met a few years after the war. The Elizabeth Suckley pictured here is presumably a sister or cousin.

The image we see here is from the May 4, 1918 edition, published at Camp Wadsworth and the last installment of the paper before the division shipped out to France. Suckley (the first vowel in her name rhymes with book) was one of the two dozen or so canteen women who provided refreshments to the men of the 27th Division. Most of these women were married and had spouses within the unit. Suckley though was not one of these. In 1918 when this photograph was taken she was 26 and unmarried. A few years earlier she had been a student at Bryn Mawr but for whatever reason her mother forced her to drop out before getting a degree. Franklin Roosevelt was Assistant Secretary of the Navy at this time but he and Suckley did not yet know each other; they would not meet until 1922. In the 23 years after that, until FDR’s death in April 1945, they would be confidants and close friends. She was one of the few people unafraid to tell Franklin when he was wrong. Margaret was one of the women present in Warm Springs when Roosevelt died.