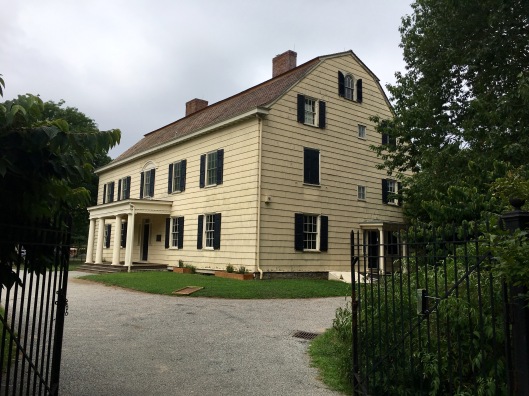 I ventured to Queens today for a visit to the King Manor. It is part of my wider project to visit places affiliated in one manner or another with Federal Hall. The home belonged to Rufus King, one of the lesser known but well-deserving Founding Fathers. King was born in what is now Maine and fought in the Revolutionary War before serving in the Confederation Congress. He helped write the Constitution and then served in the First Congress, where he worked in the upper chamber alongside Philip Schuyler as a New York senator. His son John Alsop King took over the house after his father’s death in 1827. The name John A. King fang faintly familiar and when I got home I checked the draft of “Incorporating New York,” my manuscript about Civil War Era New York City, and realized he was a minor figure in my narrative; King the Younger was defeated by Edwin D. Morgan in the 1858 New York gubernatorial election. Until today though the name John A. King had just been a name in a history book. That’s why place is so important.

King Manor became a historic site in 1900, the house itself owned by the New York City Parks Department and managed by the King Manor Association. As best I can tell, this is still the arrangement 120 years on. A perusal of online newspapers shows the house was used rigorously for various things and by various organizations over the decades. This would make sense. Queens developed later than the other buroughs and there probably much less infrastructure where groups could have gathered. Jamaica was more Long Island than New York City. The Daughters of the American Revolution, for one, created a Rufus King Chapter in 1918 during the Great War that met at the spacious house. The D.A.R. met there for decades. Like much of New York King Manor struggled in the harsh years before gentrification. In 1973 some punk teenagers started a fire on the porch that almost burned down the then-almost 250-year-old house. Thankfully the custodian kept it in check before the firemen arrived and put it out.

The tour was led by an extraordinary young person who incredibly is still in high school. There is no way I could have pulled off something like that when I was that age. I asked the person when they began at the house and the answer was July, just last month. I had to ask again because I thought I’d heard wrong. The is something about watching Interpretation done well. And when it’s done by a person so young and just starting out, it is that much more incredible.