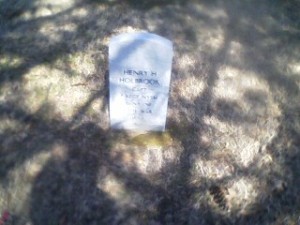 Hey everybody, it’s early Sunday afternoon.  I just got back from a brisk walk in Green-Wood Cemetery.  I was not there looking for Civil War graves per se, but with over 3,000 Union—and numerous Confederate—soldiers interred there it is inevitable that one will come across them.  Above is Captain Henry H. Holbrook, an officer who survived the war, died several decades later, and now rests next to his parents here in Brooklyn.  It is not a contest but I have always believed New York State had the greatest number of Civil War dead with 46,000 killed—more than 10% of the war’s total.  This should not surprise us given that according to the 1860 census New York was the most populous state North or South.  Pennsylvania and Ohio were the second and third most populous.

There is an interesting piece in yesterday’s WSJ about current efforts to tally the Civil War dead.  Such disputes have been going on since the guns fell silent and are likely to continue as more records are digitized and made available to scholars and the general public.  Arguments like this are part of a larger phenomenon—all too human to our nature, I suppose—in which people’s claims to history come at the expense of others’.  Most bitter regarding the Civil War have been the disagreements between Virginians and North Carolinians.  Tar Heels have often felt short-changed by history, believing that Virginians, all the way up to Lee himself, have gotten credit as the expense of North Carolina.  This is why we now call Pickett’s Charge the Pickett-Pettigrew-Trimble Charge.  It’s important to work harder to better understand the Civil War and its meaning to us today.  Still, one cannot read something like this without a small touch of amusement.