Hey everybody, today is Ulysses S. Grant’s birthday. Unfortunately I was not able to attend the ceremonies at Grant’s Tomb today.  Last night I did visit the W. O. Partridge statue in Crown Heights, Brooklyn. 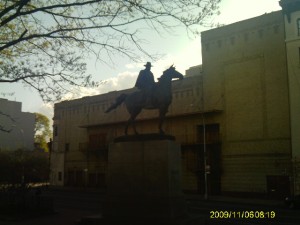 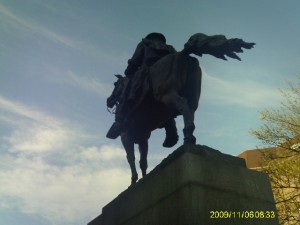 This equestrian statue was designed by William Ordway Partridge.  It is one of two Grants in Brooklyn, the other being under the arch at Grand Army Plaza.

The Union League Club of Brooklyn gave the statue to the city in 1896, eleven years after Grant’s death and one year before the opening of his tomb.  “City” here means Brooklyn, not New York; our fair borough was its own municipality until the merger in 1898.

Technically the club donated the statue on Grant’s birthday, but the ceremony was actually held two days earlier, on the 25th .  Most of the immediate Grant family, including Julia, were in attendance.  The governor and mayors of Brooklyn and New York also shared the stage.  Thousands were on hand for the parade, music, and speeches.  General Horace Porter, who was doing so much in these years to make sure Grant’s mausoleum became reality, delivered the oration.  A teenaged Ulysses S. Grant III—yes, the man who later chaired the United States Civil War Centennial Commission—pulled the cord to unveil the statue. 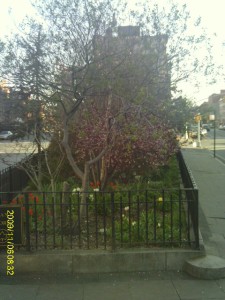 It was chilly and somewhat rainy that Saturday, but an April day in Brooklyn is always beautiful.  This small garden is directly behind the statue.

The statue stands in front of the Union Club, whose cornerstone was laid in 1889.  The building is a senior citizen home today.  An employee leaving for the day told me they are often asked about the building and statue but were unaware of its history.

These terra cotta reliefs of Lincoln and Grant decorate the exterior.  You can make these out if you look between the arches in the photograph of the Union Club entrance. 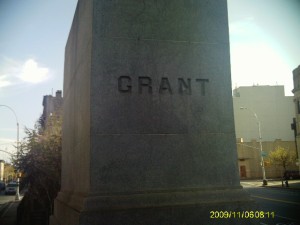 One word said it all a hundred and fifteen years ago.