Hey all, sorry about the dearth of posts recently. I just got back from DC, where I went to meet a friend and take in the sites. Among other things, I caught the Adalbert Volck exhibit, which I highly recommend. With a heat index of 105 all one could do was stay inside. Alas, no Mall this time around. I am now checking my inbox I received this notification that Ellis and Liberty Island, for the first time ever, are having extended summer hours. This is a great trip for those looking to get away from the city without leaving the city.

I am having my Sunday morning coffee and surfing the internet. Here is some amazing film footage of Governors Island from the 200th anniversary of the Coast Guard in 1990. Those who have been to the island will recognize many of the scenes. It is hard to believe that 1990 is now the “then” and no longer the “now.” Enjoy your Sunday. 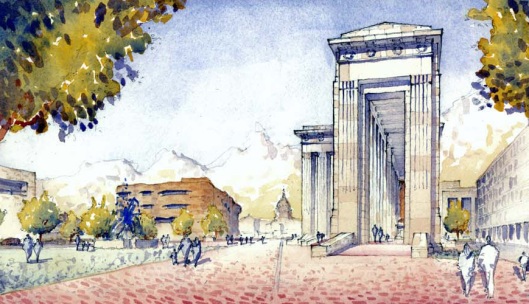 In the spring of 2011, the National Civic Art Society (NCAS) and the Institute for Classical Architecture & Art (ICA&A) Mid-Atlantic Chapter invited classical architects and artists to engage in a competition to design a counterproposal to Frank Gehry’s design of a national monument to President Dwight D. Eisenhower.

Next week the results go on display in Washington. The exhibit kicks off with a reception on Tuesday the 17th, and will then be on display until September. Conveniently it is close to the Union Station metro station. Unfortunately it is behind a paywall, but Vanity Fair has a piece by Paul Goldberger in the August issue about the Eisenhower memorial saga. The controversy has been heating u recently, with Congress threatening to withhold funds from the current incarnation of the memorial. I will be in DC next week but it doesn’t seem I will have time to catch the presentation. I am going to do everything I can to see this before the summer’s end. Next week I do hope to finally see the Martin Luther King Jr. memorial on the Mall, which I have been eager to see since its unveiling.

The NCAS competition results can also be viewed online.

State and local officials in Tennessee are mounting a campaign to have the Battle of Franklin commemorated on one of the postage stamps in the Unites States Postal Service’s ongoing recognition of the Civil War sesquicentennial. I have blogged about this each of the past two years and will continue to do so through 2015. I think Franklin has a fighting chance. For one thing, hard as it is to believe, the last stamp commemorating Tennessee was the 1862 Shiloh stamp shown at right. The Centennial stamps were indeed beautiful and this one, elegant in its simplicity, was no exception. Franklin should also benefit from what I will call, for lack of a better term, strong competition relatively speaking. The Postal Service is issuing two stamps a year in the series, and so far the choices have been easy and obvious. For 2011 there was Fort Sumter and First Bull Run. Antietam and the Battle of New Orleans were the selections for 2012. Gettysburg would have to be a lock for 2013, with perhaps the Emancipation Proclamation filling out that set. I would imagine that for 2015 we will be looking at Appomattox and the Lincoln assassination as the selections. Obviously there were significant events in every year of the conflict, but what to choose for the sesquicentennial subjects of 2014? The Battle of the Wilderness and Fall of Atlanta would have to be the frontrunners. Franklin could be a good move because a) it is somewhat less obvious and, b) adds a Western motif to a series otherwise dominated by events in the Eastern theater. I don’t know if the design fits in esthetically with the sets we have seen so far, but perhaps the USPS will go in a different direction in the rest of the series. Whatever happens, I look forward to finding out.

Since we returned from Gettysburg late last week people have been asking me what I most enjoyed about the trip. The answer, hands down, was the excursion we made one morning to Evergreen Cemetery. I had of course been to the National Cemetery several times, but until this June I had never been to the town resting place lying adjacent to it. Now that I have, I feel I understand the town and the battle in a way I had not previously. Here are a few photos. Note that all contemporary images were taken in June 2012. A frustrating snafu on my part caused me to program the wrong year in my digital camera. The Hayfoot can attest to how frustrated I was when I discovered my error.

One would have to start with James Gettys, founder of Gettysburg. 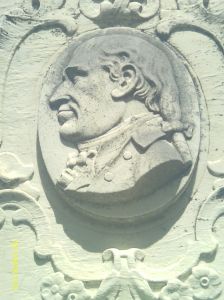 John Burns is one of the Battle of Gettysburg’s genuine characters. A veteran of the War of 1812, the aging Burns grabbed his musket and headed toward McPherson’s Ridge when he heard the sound of the guns.

Here he is looking west toward the Chambersburg Pike.

The battle becomes more immediate when one sees the headstones of individuals whose names gave their designations to some of the battle’s most important events. There is no substitute for getting out and seeing where history was made. 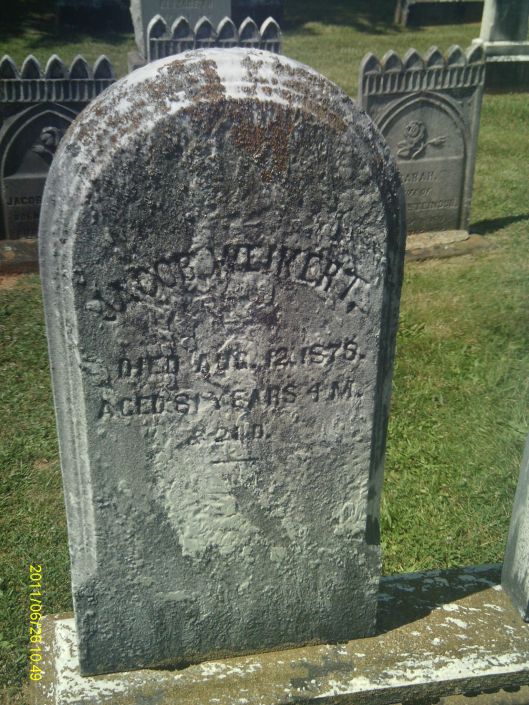 Above is another example. 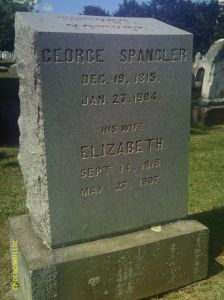 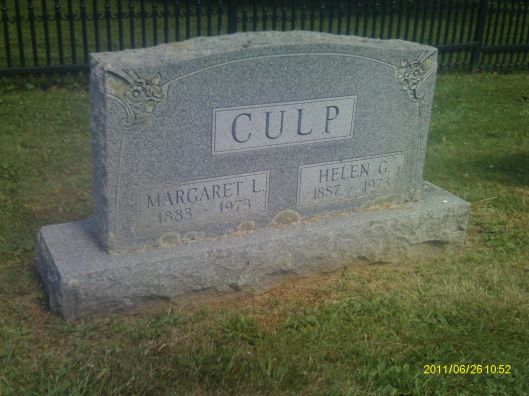 Many of the families are still very much a part of the community. There were numerous plots of easily recognizable family names considerably more recent than these. 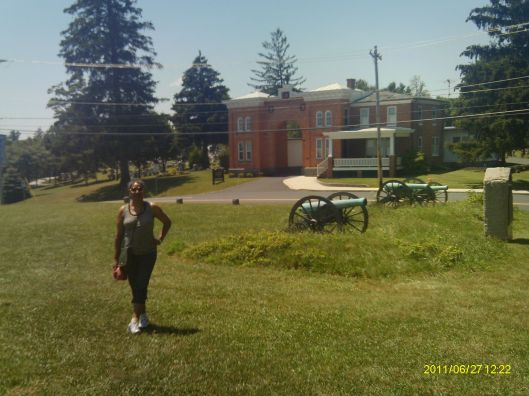 Gettin’ our sesquicentennial on…

Last night I watched a documentary called Long Shadows: The Legacy of the Civil War. The film was produced by Ross Spears, a documentarian whose focus is Southern literature and culture. Spears made the film in the mid 1980s and he interviewed a disparate collection of historians, journalists, novelists, and plain folks (Northern and Southern) about their views on the Civil War and its legacy. Part of what makes the film interesting is that for many of the talking heads the war was not “history” but a tradition passed on to them in their youths by living relatives, often grandfathers who fought in the war. Those interviewed include Jimmy Carter, Robert Penn Warren and C. Van Woodward (together), Tom Wicker, John Hope Frankiln, Studs Terkel, and the incomparable Albert Murray. (Quick digression: I once ran into Mr. Murray in the Strand bookstore and can attest that in person he indeed has that mischievous smile and graciousness one would expect.) Born in the first decades of the twentieth century, these individuals saw their region transform from a poor backwater region to the Sunbelt mecca it is today. The film captures some of the exhaustion that was prevalent in the decade after the energy crisis, the fall of Saigon, and immediate post Civil Rights Era. The film does and excellent job explaining how the Civil War is still very much a part of our lives and why we should care today. The past is never dead. It isn’t even past.

Originally released in 1987, Long Shadows is about due for a sequel or at least a postscript. Hopefully Mr. Ross will use the sesquicentennial to update his film and show us how the long shadow of the Civil War continues to offer shade and darkness a quarter century after its original release. 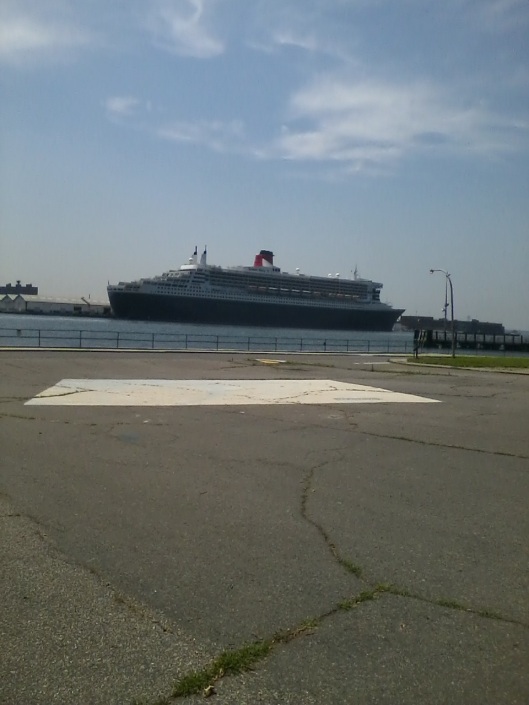 It is the 4th of July. The Hayfoot just returned from the store with charcoal for the grill. The potato salad is almost done. I hung the flag.

A few years ago I went to the Queens Museum of Art to see one of the several museum exhibits running concurrently about the legacy of Robert Moses. The exhibits, held in Queens and also at Columbia and the Museum of the City of New York, were offered a necessary corrective to Robert Caro’s valuable but flawed interpretation of the Master Builder. Moses was indeed a bully; he also gave New Yorkers the city that for better and worse–often better–they live in today in the twenty first century. The Queens exhibit focused on several aspects of the Moses legacy, including the swimming pools he designed and had built. The Wall Street Journal has more.

These fields can never be
simply themselves. Their green
seems such a tender green,
their contours so significant
to the tourists who stare

towards the far range of mountains
as if they are listening
to the page of history tearing
or to what they know themselves of warfare
between brothers. In this scenery

cows and cannons stand side by side
and motionless, as if they had grown here.
The cannons on their simple wheels
resemble farm carts, children
climb them. Thus function disappears almost entirely

into form, and what is left under
the impartial blue of the sky is a landscape
where dandelions lie in the tall grass
like so many spent cartridges, turning
at last to the smoke

of puffballs; where the only red
visible comes at sunset;
where the earth has grown so lovely
it seems to forgive us even as we are learning
to forgive ourselves. 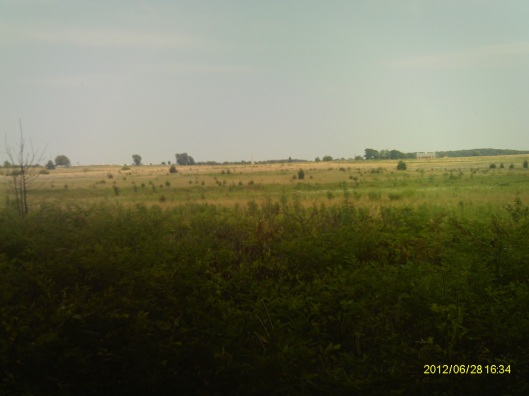 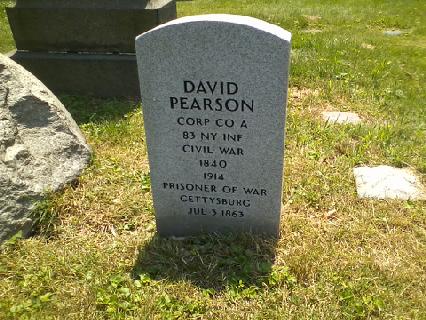 Unfortunately the photo is somewhat small because my cellphone camera was all I had, but I was in Green-Wood Cemetery earlier this afternoon and came across the headstone of Corporal David Pearson of the 83rd New York Volunteers. The 83rd was part of the First Corps and fought in Zeigler’s Grove on July 2 & 3, where Pearson became a prisoner of war. A quick search on Fold3 says that Pearson enlisted on May 27, 1861 and was mustered out on June 23, 1864. It is sometimes lost on us how well into the 20th century many Civil War veterans lived. Pearson applied for a pension on Novemeber 24, 1900 and lived until 1914. This headstone is one of the thousands laid in the past decade by Green-Wood Cemetery to mark the nearly 4,000 Civil War soldiers buried there. Here is the headstone next to the Pearson family monument.