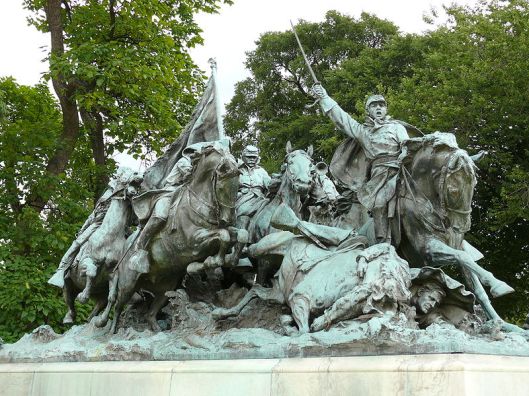 Happy Easter. I am sitting in the living room with my coffee and Kind of Blue is on the turntable. The windows open to the early spring warmth.

I was having a brief back-and-forth online the other day with someone about Grant’s Tomb. Specifically, we were talking about how far the monument had fallen during New York City’s lost years in the 1970s and 1980s. This excellent piece in yesterday’s Wall Street by Dennis Montagna of the Park Service about the Grant Memorial on the grounds of the national capitol got me thinking even harder about various Grant statues and monuments I have seen over the years. Built from roughly 1885-1922, the monuments initially reflected the nation’s sentiments for the man many put in the same class with Washington and Lincoln. After the horrors of the First World War the Grant the Butcher meme took hold and his standing went down precipitously in the coming decades. To visit Grant Cottage in Upstate New York one must enter the grounds of a medium security prison. People walk past the beautiful Grant statue in Brooklyn, across the street from what was the Union Cub, everyday without think twice about it. When I visited two years ago a woman who worked in the adjacent building said they always wondered who it was, which struck me as odd because his name in on the pedestal. Oh well.

In a sense these things are inevitable. It is not even just Grant. I have seen beautiful statues of Lincoln in places like Newark and Jersey City that are visited by no one except the homeless who now inhabit those areas. Time moves on. Demographics change. Once thriving industrial areas that could afford a statue in, say, 1913 have better thing to worry about a hundred years later. The recent immigrants of Flatbush–and it is the immigrants who have revitalized Brooklyn in the past 25-30 years–are concerned with educating there kids and moving on to bigger and better things, not the particulars of the old statuary in their neighborhood.

The major ones deserve are our attention, though. Great things have been done to revitalize the vicinity around Grant’s Tomb in Upper Manhattan. Hopefully, strides will be taken with the Grant Memorial on the capitol grounds. It would be great if they got rid of the ugly reflecting pool for starters. The Grant bicentennial (1822-2022) is just nine short years away.