I went to the ASDA stamp show at the New Yorker hotel yesterday. I was looking more than anything else. A pack of hinges, a notebook for mint sheets, and a few first day covers were about all I bought. There was a lot to see, and just for fun I was looking through the discount bins of various vendors on the chance that maybe an inverted jenny might have slipped through the cracks. Alas, there were no jennies, but I did come across a fun little thing: this piece of correspondence between the Oklahoma State Board of Pension Commissioners and one Benjamin L. Perry.

Here is the other side. 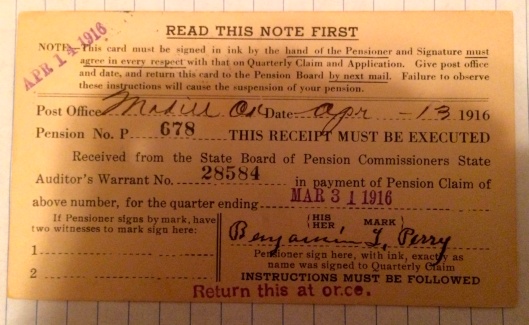 Despite my best efforts, I was unable to find any information about Perry in Ancestry or Fold3. An internet search did reveal this document, however. 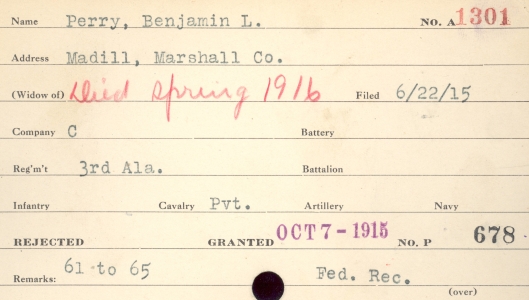 Oklahoma began issuing Civil War pensions in 1915, fifty after Appomattox. A soldier did not have to have served in an Oklahoma unit to receive a pension. This makes sense, as so many people moved to the territory after the war. As you can see, Perry fought in the 3rd Alabama Cavalry. Perry settled in Madill, which is in southern Oklahoma near the Texas panhandle. The Texas/Oklahoma border was a focal point especially for Alabamians and Tennesseans fleeing the poverty and devastation caused by the war. Sam Rayburn’s family, for instance, was part of this migration. The future House Speaker’s family left Tennessee in the 1880s and settled in Bonhan, Texas. Perry was just a lowly private, not the Speaker of the House of Representatives. I was hoping to find a photograph of his grave, but found none.

A few things about the postcard itself. First, it has no zip code. We think such things “always” existed but of course this is not the case. Mr. ZIP is only in his fifties. Second, I was intrigued that the building was listed on the address, and so I went looking for a picture of it. Here is the Patterson Building.

The Patterson was designed by Solomon Andrew Layton. The building no longer stands, but its renowned architect has no less than twenty-two buildings currently listed on the National Register of Historic Places. It makes sense that such a talented and prolific individual would be working in remote Oklahoma in the early twentieth century. For starters, the region was flush with oil revenue. Art and architecture follow the money. Moreover, the territory achieved statehood in 1907. It stands to reason that officials and citizens would want first-class civic spaces for the new state. That is why the Board of Pension Commissioners landed in this grand structure.

Benjamin Perry applied for and received his pension in 1915, but he did not have much time after that. The postal correspondence signed by him above is from April 1916. He must have died six to eight weeks after that, because as you can see died in “Spring 1916.” I must say I felt a tinge of sadness about the whole thing.

And that is how I spent my Saturday.