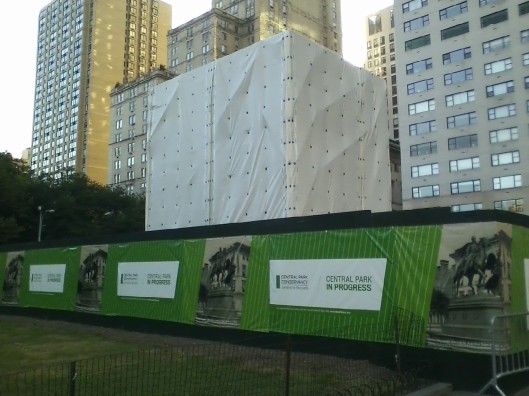 Update: I was in the city running some errand or another last week and noticed that the Sherman statue in Grand Army Plaza was still covered up. I was a little surprised, as the post I wrote about this was some months ago. Still, the stature did need work and I would rather that they do it right. Today’s New York Times has more on the project, complete with video.

I was in the city bright and early this morning running to a dentist appointment when, crossing 59th Street toward 5th Avenue, I noticed that the Sherman statue was covered for renovation. I blogged about the area back in 2011. I had not been in the neighborhood for a while and this was the first I had seen or heard of the project. My first thought when I saw the fencing and signage was, The Central Park Conservancy manages the plaza, along with its Saint-Gaudens masterwork? Then again, why should I be surprised? A quick internet search reveals this New York Times article with the full story from mid-June. The short version is that the pigeons were winning the battle of attrition versus General Sherman. Apparently previous restoration efforts did not go to well; guilding applied in 1989 was too bright, giving the artwork an unnatural hue which angered and upset many in the neighborhood. I have no fears for this current project and am sure the end result will be fine. Keeping the pigeons away permanently is another story.

I am not counting on it but I would love to see a more concerted effort to preserve Civil War New York and see it presented to the public in a more conscious way.