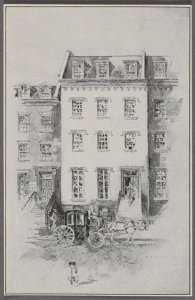 I finished David McCullough’s Mornings on Horseback last night. This is the ur-text for anyone who works or volunteers at the Theodore Roosevelt Birthplace. As McCullough points out in the introduction, Mornings is not so much a biography as an exploration of how this man born just prior to the CIvil War became the man he did. The book ends in the mid-1880s with Theodore’s life less than half lived. It hardly seemed that way however, given how much he managed to pack in before his 30th birthday. The White House is still fifteen years in the distance.

This is the prep work leading up to my own Interpretive programs, which I am looking forward to doing once I have the narrative down firmly. What I am finding I love about the Roosevelt story is the number of ways it can be told. Walk around the Flatiron District in the East Twenties and you are stepping back into an Edith Wharton novel. Tell the story of how his mother Mittie, raised in Georgia, was an unreconstructed Southerner and you have the Cvil War. Assemblyman Roosevelt? That’s him taking on Tammany Hall. And oh yes, it is a human story too. His wife and mother did die on the same day in the same house–two days after his daughter was born. That does not even get you to San Juan Hill, the Albany governors mansion, the White House or the decade of his life that came afterward. It is hard to believe he died at sixty. I can’t tell you how much I am enjoying this.