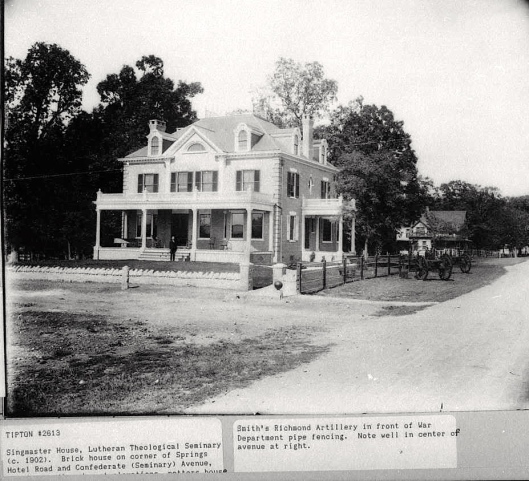 I got my sesquicentennial on last night and went to St. Francis College in Brooklyn to see a one-person play about Gettysburg. The show, appropriately enough, was titled Gettysburg: One Woman’s War and starred actress Michele LaRue. The play was actually three separate stories, each based on a different moment in Gettysburg history: 1 July 1863, 19 November 1863, and the 50th anniversary in 1913. These stories were all written by Elsie Singmaster, who I must confess I had never heard of until yesterday. Singmaster was born in 1878 and, unfortunately for her legacy, has been tagged a “regional writer” for her many works on the Pennsylvania German community. Her star seems to have risen in recent years with the rise of Women’s Studies, though any type of labeling is fraught with its own pitfalls.

I had a brief but pleasant conversation with Ms. LaRue after the performance during the reception. I told her that my favorite place in Gettysburg is Evergreen Cemetery because so much of the town’s history is there in front of you. She got a kick out of that. The vignettes Ms. LaRue adapted all came from Singmaster’s 1913 collection Gettysburg: Stories of the Red Harvest and the Aftermath. One can check it out online if so inclined.