I was in Green-Wood Cemetery this afternoon for a quick walk when I came across this headstone for one of the men from Joseph Hawley’s regiment. Hawley notes in the 7th’s regimental history that Mills had returned from recruitment duties just in time for the fighting at Pocotaligo in October 1862. Mills is mentioned again during the fighting in the Bermuda Hundred outside Richmond. There, 150 years ago this month, Mills was mortally wounded when shot in the chest.

His death must have been traumatic for all involved. According to Hawley, his and Mills’s wives, with a few other officers’ spouses, “made a social circle which formed an oasis in military life which was remembered with great pleasure in the continuous battles from July, 1863 to the close of the war.” In early January 1864 when the fighting was again about to heat up ” All the ladies, except Mrs. Hawley and Mrs. Mills returned north.” It must have been a difficult death if he held on for another six months before expiring in January 1865. I would love to know the circumstances of how he came to be buried here in Brooklyn. 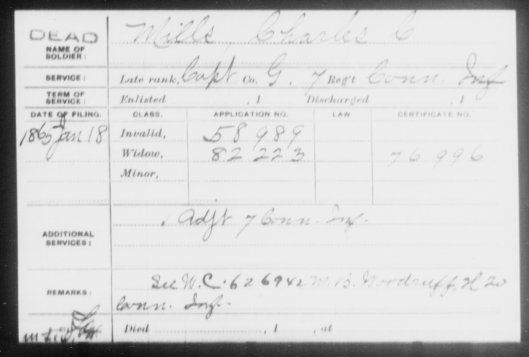