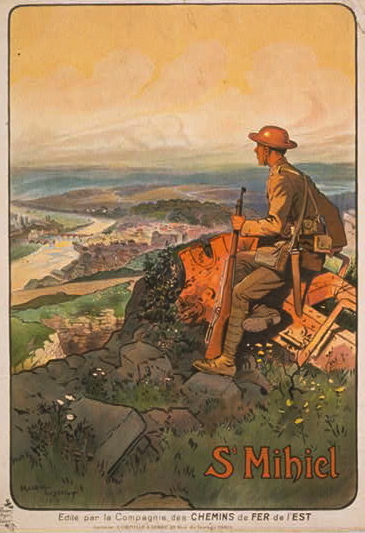 I am sorry about the lack of posts. It was a busy week. The semester at my college is now in full swing. I also gave a talk at a Civil War roundtable on Wednesday, which took some time to put together. The talk went well and it was a great time. The group may come to Governors Island for a field trip next summer.

Today is the anniversary of the battle of St.-Mihiel. The memory of St.-Mihiel parallels the battle of South Mountain; both were largely overlooked because of the larger fighting at Antietam and in the Meuse-Argonne that took place shortly thereafter. I am hoping that misconceptions like these are changed during the Great War centennial. My news feeds have pulled in quite a bit of centennial coverage from Europe over the past two months. I hope Americans don’t wait for three years for the anniversary of the U.S. declaration of war to start paying attention.

During a Centennial Commission conference call on Wednesday someone mentioned the reconstruction of a WW1 monument right here in Brooklyn. I must say I was surprised and had missed this story entirely. Apparently in the early 1970s vandals desecrated the Saratoga Monument in Bed-Stuy, stripping it of its bronze plaque and selling it for scrap. Such vandalism was not unusual during NYC’s Dark Years. Grant’s Tomb, for instance, was covered with graffiti and even bullet holes in some of the structures on the exterior grounds. If my friend Charles Hirsch were still alive I would have gone with him on an excursion to check out the Saratoga Monument. It won’t be the same but I will still make it out there in October, with pictures and commentary.

It is going to be a bust weekend, TRB tomorrow and Governors Island on Sunday. It should work out well because it is supposed to rain tomorrow and be nice Sunday. There are three more weeks to go in the GI season.