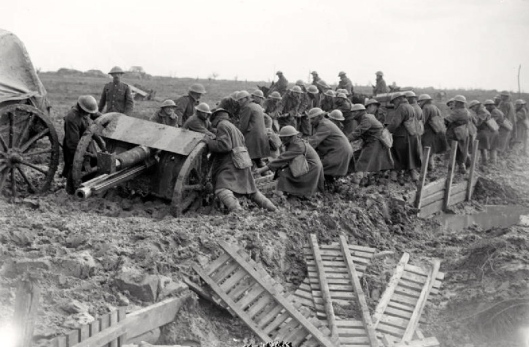 British Tommies toil in the mud at Third Ypres, October 1917

This article is a little dense but I wanted to pass along Wilfred M. McClay’s article about the First World War and what it did to the notion of human progress. I remember being in graduate school 10+ years ago and having this discussion with my professor in a class on Modernity. One of the most fascinating aspects of World War One is that it came at a moment when two opposing notions were running parallel to each other. Never was Europe stronger; never did it control so much of the earth’s surface; never did the future, with its rationalism and idea of scientific progress, seems so limitless. Yet things were tenuous underneath–and not so far underneath–the surface. Reactionary monarchies ruling over unwieldy constituencies. Social strife. Nascent colonial independence movements. Jim Crowism and racial unrest here in the United States. These were all there as well. How these problems might have been resolved had the war not come we will never know.

As McClay notes, there is still an odd duality in our consciousness. On one side there is the hand-ringing and the postmodern nihilism that says we can never find objective truth; at the same time many in the West still believe it is possible to intercede and improve the world’s lot through thoughtful effort. Think of Bill Gates’s work on eradicating West Nile virus. It could be that one needs the notion of Progress in order to move forward. Still, the idea can have disastrous results and unintended consequences. Think about current events from our own recent past.