I was out-and-about not long ago when I saw something that instantly seemed familiar. It was a sketch by John W. Thomason. The name may not ring many bells but Colonel Thomason was one of the great sketch artists of the early twentieth century. He also authored what many consider to be the authoritative account of American involvement in the First World War. That was why the image looked so familiar, because I had seen his work decades ago when I first read Fix Bayonets! Naturally I bought the small, framed image. It now hangs in my office.

The image shows a young French woman walking past a trio of weary marines. It is hard to make out, but the wear and tear on her shabby clothes are testimony to how difficult things had become in Europe by 1918. The duck is something of a Thomason trademark. He included them frequently in his work. Growing up in Texas, he was quite the hunter and outdoorsmen. Thomason was born in Huntsville in 1893.

I had not read or thought about Thomason for more than two decades until seeing the framed sketch. Eager to know more, I checked out a few books from the library.  His grandfather was Major Tom Goree, who had served on James Longstreet’s staff. The Lost Cause is an obvious cultural reference point for Thomason. How could it not? 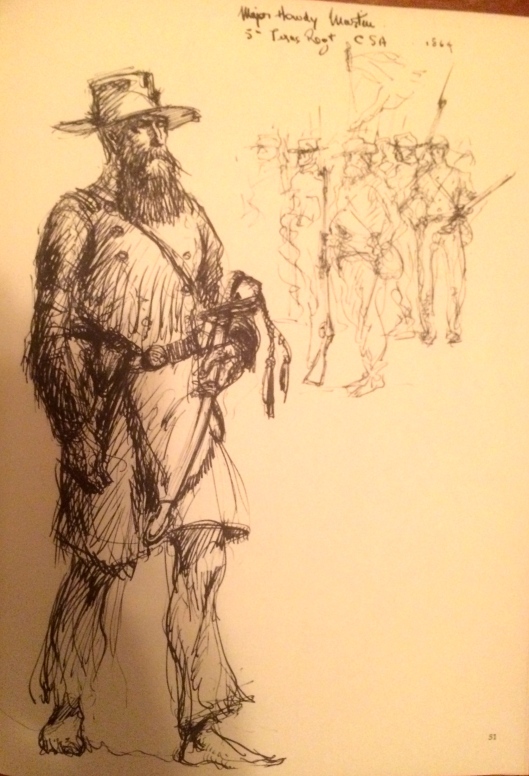 The bare feet are a poignant touch. Thomason grew up surrounded by many men who had fought with Hood’s Texans.

The editors of the sketchbook from which I took these photos were helpful in including the studies of the revolver, spurs, etc. Too often we think art “just happens,” not understanding how much thought and toil the artist invests in his work.

Thomason attended the Art Students League in 1914 and was a struggling artist for a few years. He found his calling as soldier/artist when the United States declared war on Germany in 1917. He was a marine with the 2nd Division and fought at Château-Thierry, Soissons, and the Meuse-Argonne. 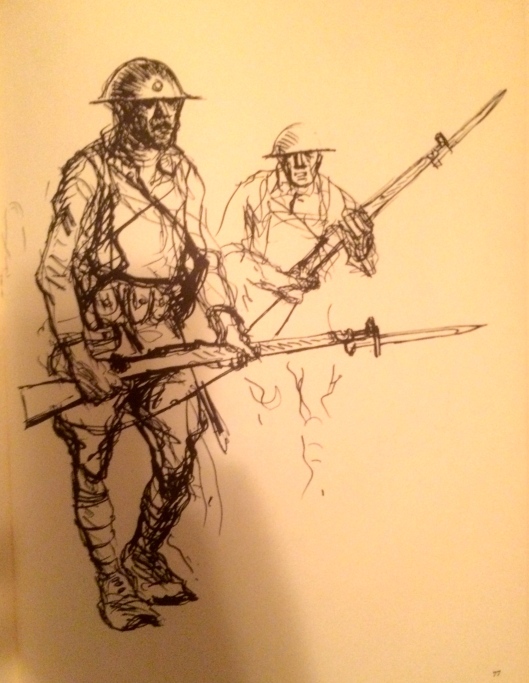 Thomason stayed in the military after the Armistice. He was a good friend of Hemingway’s, who called Thomason the best soldier he knew. In the ensuing decades Thomason short stories were much in demand in such places as the Saturday Evening Post. He even collaborated with Ted Roosevelt, who as an officer in the 1st Division had fought in many of the same battles as Thomason.

1 thought on “A brief remembrance of John W. Thomason”