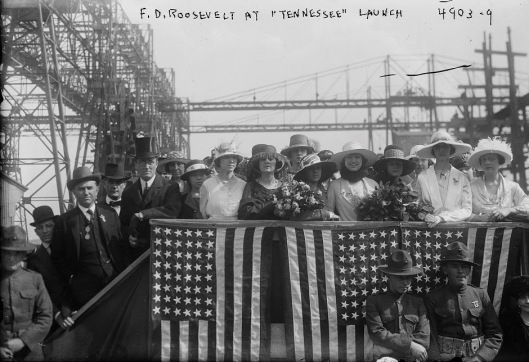 Franklin Delano Roosevelt (left, top hat) at the launching of the Tennessee, 30 April 1919

Acting Secretary of the Navy Franklin Delano Roosevelt was at the Brooklyn Navy Yard on this date in 1919. He was there for the launch on the super-dreadnought Tennessee. This was a major event; at least 30,000 New Yorkers turned out for the launch of the 624 foot ship on that April morning. Franklin Roosevelt must have felt proud. Like his cousin Theodore, he loved the sea and any type of floating vessel. Theodore Roosevelt understood the increasing importance of big ships and had sent the Great White Fleet around the world a few years prior to the Great War. When war came the Wilson Administration was reluctant to invest in the Army or the Navy. Still Congress did authorize the construction several dreadnoughts, including the Arizona, New Mexico, and Tennessee among others. (I wrote about FDR and the Arizona last August.)

The U.S. was at a huge disadvantage when it came to ships during the First World War. As David Kennedy points out in Over Here, ships were “trumps” and the British controlled most of the cards. The Americans were largely dependent on the British, especially for the transport of men and materiel. The Navy Yard was working overtime to complete its many projects but even with all the extra work they did not finish the Tennessee before the end of the war in November 1918.

Note the doughboys in the lower right hand corner.