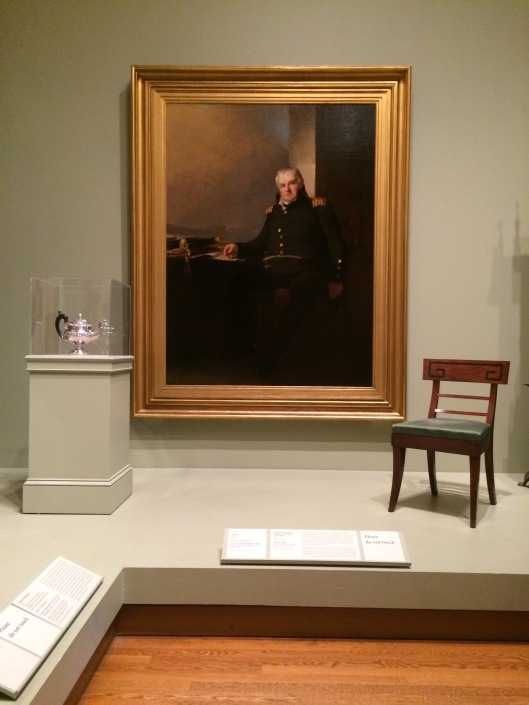 Though born in Boston, Jonathan Williams was very much part of Philadelphia society. He rests today in Laurel Hill Cemetery.

I was at the Philadelphia Museum of Art Museum yesterday. Imagine my shock when I turned a corner and came across this large portrait of Jonathan Williams. The name may not be familiar to everyone, but Colonel Williams was the engineer who modernized Governors Island’s Fort Jay and built Castle Williams. And those were just a few of his many accomplishments. I have never understood why Williams is not a better known figure in American history. He was a grand-nephew of Benjamin Franklin and a good friend of Thomas Jefferson. President Jefferson appointed Williams first superintendent of West Point in 1801. Williams codified many of the Military Academy’s early practices and incorporated a curriculum strong on science and engineering. This should not be a surprise; Williams and his great-uncle shared a fascination with science and technology.

At West Point Williams founded the United States Military Philosophical Society to promote science and engineering among the cadets. In this pursuit he was encouraged by President Jefferson. The MPS only lasted a decade or so, eventually giving way to the intense preparations for the War of 1812; Williams was in New York by Jefferson’s second term helping to fortify New York Harbor.

It is fitting that the painting above is in Philadelphia. Williams had returned there and spent the remainder of his life in the city of Brotherly Love. Among other things he was active in the American Philosophical Society, which is probably what led to this portrait. The APS provided studio space for artist Thomas Sully, who executed this portrait in 1815. Williams died that same year. Alexander Biddle gifted the painting to the museum in 1964.