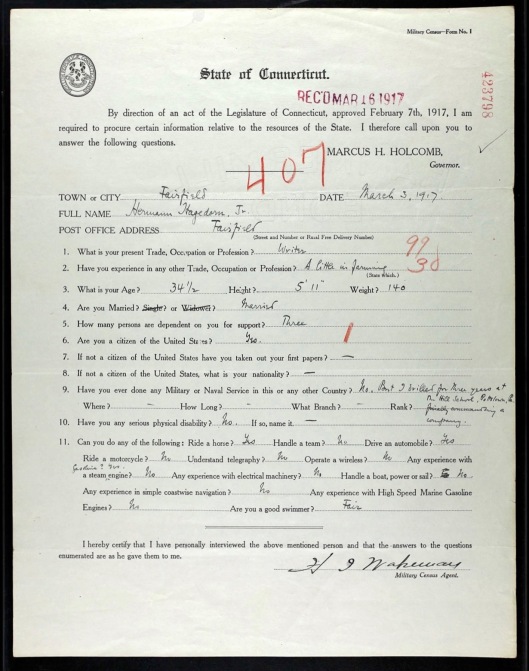 Again I’m sorry about the lack of posts over the past week. I have putting my head down and focusing on the Hermann Hagedorn piece. Happily most of the heavy lifting is now done. I have another 1200 words to go and am going to do all I can to finish the draft by Friday. If all goes well I will hone it next weekend and send off a week from tomorrow. I knew a fair amount about Hagedorn before starting the project but have a better understanding today of all he did for Roosevelt’s legacy. I did not know for one thing that he first met Theodore Roosevelt at Sagamore Hill in May 1916 when the Colonel was contemplating another presidential run. Together they did so much to help with the Allied cause during the First World War. I will share those things in the future.

Here is an interesting document I thought I would share tonight. Often I search Ancestry to research people about whom I am writing. One never knows when I good detail will pop out. Here is one such document. It is Hagedorn’s 1917 military census form. Note that he filled it out on March 3, that is one month prior to President Wilson’s request for a declaration of war. Hagedorn lists his employment as writer. It does not say so here, but he was writing at the time for The Outlook magazine, for which Roosevelt had written from 1909-14. The Outlook was a hugely influential periodical and an implacable foe of Woodrow Wilson.

This is not a Selective Service document; the WW1 draft did not come until May 18. Note the ambiguity in the document’s language. The Connecticut governor states that the purpose of the questionaaire is to “procure certain information relative to the resources of the state.” What that really meant was that they were trying to figure how many men of military age were living in Connecticut in case of war. It is amazing what documents will tell you if you know what to look for.