It’s Opening Day of the baseball season. I am listening to the Pirates and Cardinals on the radio as I type this. Living in Brooklyn it is hard not to think of the Dodgers this time of year, especially with this being Vin Scully’s final year. It’s hard and sad to imagine.

One of the great Brooklyn players was Rube Marquard, who went 13-6 with a 1.58 ERA in 1916. Two years later Marquand and another Brooklyn Robin, as the team was called at that time, enlisted in the Navy when the team was on a road trip in Chicago. Incredibly Marquard even pitched that day–Saturday 20 July 1918–going seven innings and giving up one earned run but getting a no-decision in a 6-4 Brooklyn win. Marquard did not directly enter the Navy. Secretary of War Newton Baker was still deciding whether or not baseball was non-essential to the war effort and thus cancel the rest of the season. Until a decision was made Rube and everyone else was allowed to finish the season. He did not play well that year, which is not surprising given that everyone was on pins and needles waiting to see what would happen in both baseball and the war overseas. Secretary Baker eventually decided to a allow baseball to continue, but with a shortened season ending on September 1.

His draft registration card. It is interesting to note that he lived in Upper Manhattan, which is not surprising given that he played for the Giants before the Robins. The card lists his profession as ballplayer and calls the team the Brooklyn Ball Club, its proper name.

Baseball even got a small reprieve when Labor Day 1918 fell on September 2, giving the National League an extra day. Richard William “Rube” Marquard was in uniform three weeks later. He never did go to France. Instead he stayed in Brooklyn, stationed to the Navy Yard, and played for the base team, the Mine Sweepers. It’s incredible to see it below but the War Department did not waste any time letting Marquard go. He was discharged on Armistice Day 1918. 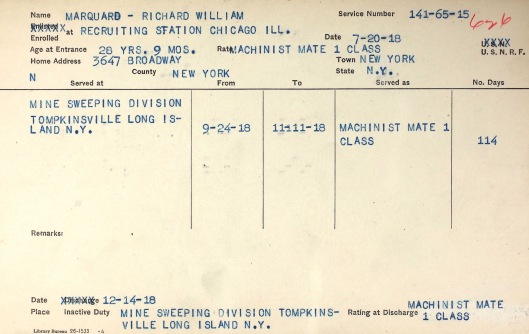 Brooklyn was in Chicago playing the Cubs when Marquard enlisted in the Navy. He pitched later that day and entered the Navy three weeks after the season ended in September. A Note: Most sources list his birth year as 1886. However, all of Marquard’s official documents–military papers, census records–say 1889.

Rube Marquard was a fun loving guy who enjoyed vaudeville and the racetrack. He ended up marrying a showgirl and had jobs working at various tracks in the decades after his retirement. His WW2 draft registration card shows him working at Baltimore’s Pimlico Race Track in 1942. Marquard was virtually forgotten until Lawrence Ritter published his oral history The Glory of Their Times: The Story of the Early Days of Baseball Told by the Men Who Played It in 1966. Five years after that Rube was inducted into the Hall of Fame in Cooperstown by the veterans committee. Many believe he was undeserving and that he is one of the weaker HOF inductees. One argument is that he got in due to the nostalgia factor. It is certainly true that after the exhaustion of the Civil Rights Era, all the assassinations, the Vietnam War, and Curt Flood’s ongoing challenge of the reserve clause the 1910s must have seemed a simpler time. Of course we know better. The past was never as easy or uncomplicated as people believe it to have been.

Marquard retired after the 1925 season. He had played eighteen seasons and finished with a record of 201-177.