The social changes that the Great War wrought are sometimes overlooked. Certain issues, most notably the Civil Rights Movement here in America and independence for Europe’s colonies–showed some progress in the 1920s and 30s but did not come to fruition until after the Second World War. Two that did succeed were Prohibition and Suffragism. It was not coincidental that the 18th and 19th amendments passed just after the war’s end. Calls for Prohibition and women’s right to vote went back decades prior to American involvement in the war. In 1916 proponents of both did all they could to influence that November’s presidential election, and state and local elections too of course. 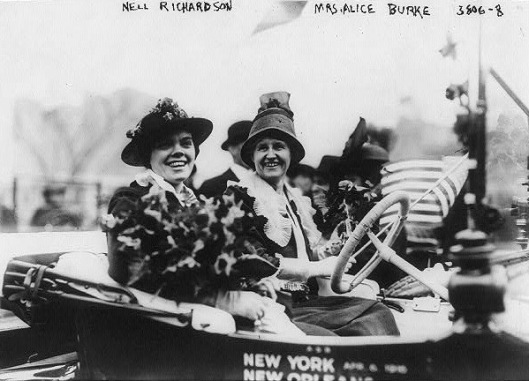 On the early spring day of April 6, 1916 suffragists Alice Burke and Nell Richardson left New York in their Golden Flyer for the West Coast. Their objective was to raise awareness and interest in the female vote. They visited forty-two states, by-passing New England, and drove over 10,000 miles in the April-October excursion to California and back. Keep in mind that there were no highways at this time. It was even three years prior to the Army’s 1919 Motor Transport Corps convoy in which Dwight Eisenhower participated. And that one only went 3000 miles.

It is somewhat surprising that the Burke/Richardson is not better known than it is. I’m guessing that a reason might be that we already have a standard narrative of the Women’s Rights Movement and this doesn’t fit the formula. Of course that is a problem regarding the Civil War and pretty much every historical subject. The heroes and villains get set and that’s it, at least for many people. Whatever the reason for so little interest in this event, it is an amazing story that deserves more attention than it has received.