Today starts the 152nd anniversary of the Gettysburg Campaign. Alas we did not make it down to Pennsylvania this year but the campaign is not far from my mind. I thought I would share this post from two years ago about Elizabeth Ann Seton. Visiting her home and shrine during the centennial was something special.

One of the most intriguing things about Lower Manhattan, at least to me, is its juxtaposition of the old, often very old, and the new. Judging by the photograph in the previous post, one could be forgiven for not grasping this. In the midst of all those skyscrapers, however, right there on tip in fact, is the St. Elizabeth Seton Shrine. From afar one cannot see it amidst the much taller buildings, but it is there. Here it is close up, as I took it last week. The skyscrapers are clearly visible behind it. All of this is right across the street from the Staten Island ferry. 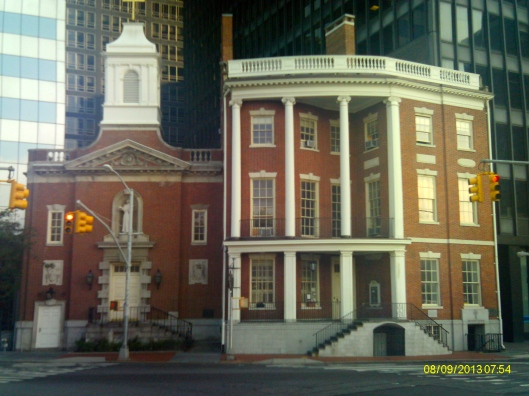 Saint Elizabeth was beatified by Pope John XXIII in 1963 and canonized in 1975. In fact, she was the first native born American so designated. Seton was born Elizabeth Ann Bailey in New York CIty in 1774 just prior to the American Revolution. Her family bounced around a great deal during and after the war, living in Pelham, Staten Island, and in different spots in Lower Manhattan. At one time they lived next to Alexander Hamilton at 27 Wall Street. (Hamilton is buried in nearby Trinity Church, in an unmarked grave. ) She and her husband even fêted George Washington, on his sixty-fifth birthday no less.

Legend has it that the structure above may have been a stop on the Underground Railroad, though evidence proving so has not surfaced. It was used for the Union War effort during the Civil War. Here is the plaque  on the exterior wall.

Many of these buildings were torn down in the mid-twentieth century to make way for office space. That is New York City for you.

Here are a few more details. 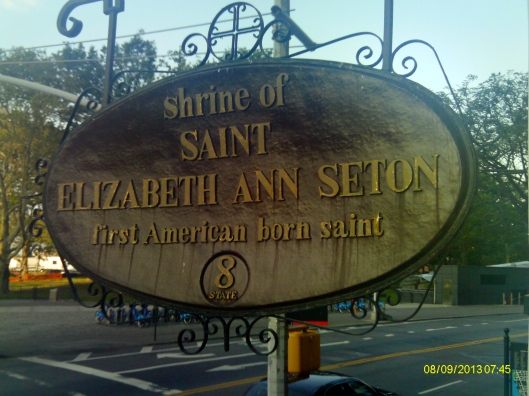 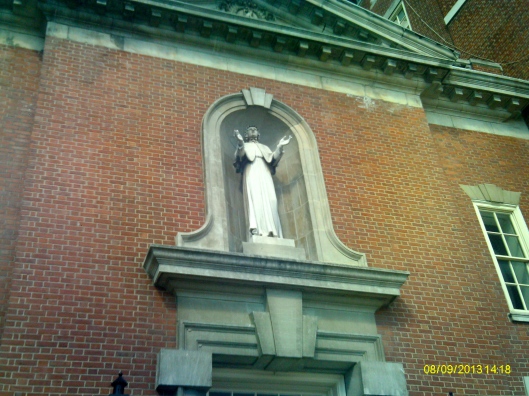 The story is more detailed than I am writing here, but Elizabeth ended up converting to Catholicism, moving to Maryland, and founding the Sisters of Charity of St. Joseph’s in Emmistburg in 1809 . She died there in 1824.

Those who know their Gettysburg Campaign may know where I am going with this. The First and Eleventh Corps both passed through Emmitsburg hurrying on their way to the battle. The Sisters of Charity, with other locals, gave assistance to the Army of the Potomac in the form of food, rest, and information about the surrounding area. Here is the view of the terrain.

One of the most touching vignettes about the Battle of Gettysburg is the death of General John Reynolds. Reynolds of course died on July 1st, killed instantly by a bullet to the head. Unbeknownst to his family until just after his death, Reynolds was secretly engaged to a woman named Kate Hewitt. He was even wearing something like an engagement ring, engraved “Dear Kate”, when he died. After his death, Kate Hewitt joined the Sisters of Charity in Emmitsburg but disappeared mysteriously three years after the war.

The Hayfoot and I had wanted to stop here for several years and finally did this past June during the 150th anniversary of the Gettysburg Campaign. Gettysburg itself is about 6-8 miles up the road. It is an incredible story on so many levels.