Freedom Tower from Manhattan’s Lower Battery at 8:30 this morning

There were definitely more people on the Battery this morning than on a usual Sunday morning. As you might guess most of them were headed for the ceremony at Ground Zero. I had never thought about it this way before, but I found the many other war/conflict monuments in the Battery comforting on this anniversary of the Trade Center attacks. This is where we had the commemoration of the sinking of the Lusitania a year ago this past May. 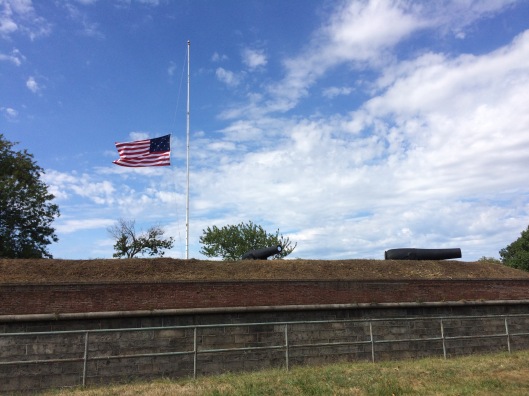 The flag–the Star Spangled Banner, if I noted correctly–was flying at half staff atop Fort Jay. On my way to Castle William for the 11:30 am tour I had to stop and take this picture (below) of these two apartment buildings. Coast Guard personnel who lived on the island in the late 1960s and early 70s have told me that from their living room and bed room windows they saw the Twin Towers go up incrementally over the years. I could not help but think of that this morning.

From these apartment buildings on the northern tip of Governors Island Coast Guard residents watched the Twin Towers rise nearly five decades ago. The Freedom Tower is plainly visible.