The funeral of Frederick W. Whitridge was in Manhattan’s Grace Church one hundred years ago today.

Theodore Roosevelt was in Manhattan on 2 January 1917 for the funeral of his friend Frederick W. Whitridge. Whitridge had been the long serving president of the Third Avenue Elevated Line and had died on 30 December. The funeral was at Grace Church on Broadway and 10th Street. Colonel Roosevelt was a pallbearer along with Joseph H. Choate, J.P. Morgan, British diplomat Cecil Spring-Rice and others. It was fitting that Ambassador Spring-Rice was there; Whitridge, an American, was the son-in-law of British poet Matthew Arnold. 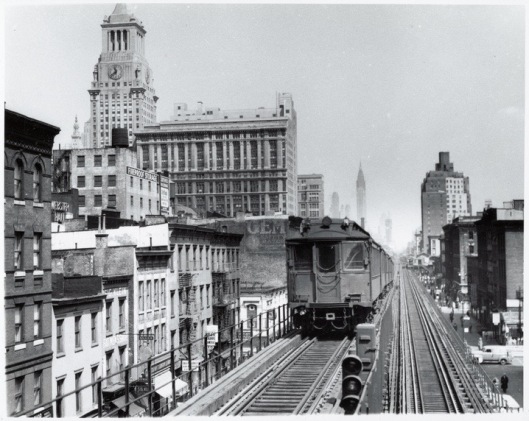 The Third Avenue El was part of New York life for decades.

One can say this of anyone in any era but Whitridge’s funeral signaled an interesting before-and-after moment. Decades earlier Whitridge had been a supporter of Theodore Roosevelt Sr., coming to his aide after the powerful New York senator Roscoe Conkling blocked his appointment to the New York Custom House during the Hayes Administration. In the 1880s Whitridge was a Civil Service reformer, which is presumably where he came into Roosevelt’s orbit. As mentioned Whitridge was the president of the Third Avenue Elevated Line, one of the four commuter rails that took New Yorkers about their daily lives until being torn down after the Second World War. As leader he was charged with the thankless tasks of negotiating stock portfolios and handling worker strikes. This was no small thing: the elevated lines were part of the daily fabric of New York life and any disruption was duly noted by the public.

One person who missed the funeral was Frederick’s son, Captain Arnold Whitridge, who had been serving with the British Royal Field Artillery since 1915. Arnold was actually an American, a 1913 graduate of Yale, who was attending Oxford when the Great War broke out in summer 1914. With his father’s death he was back in the United States though not for long. When the U.S. entered the war in April 1917 he joined the A.E.F. and soon found himself in France once more.