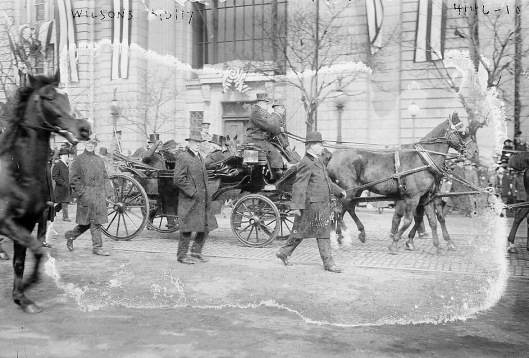 This grainy image captures the cold and grim mood in Washington as President Wilson (top hat, in carriage) attends the ceremony for his second inaugural on 5 March 1917.

Woodrow Wilson’s second inaugural was one hundred years ago today. As then stipulated by the Constitution he had actually taken the oath the day before, Sunday 4 March, in a small ceremony in the Capitol building observed by his wife Edith, a few cabinet members, and some close friends. It was the fourth time in American history that the inaugural had fallen on a Sunday with public ceremonies thus moved to the following day. In a strange parallel to the 2017 inaugural there was a woman’s march taking place a well, with suffragists coming from around the country to press their cause as Wilson was to begin his second term. The final week of Wilson’s first term had been a tense one. It was ironic that Wilson was taking the oath there and then in that small chamber just after the noon hour on 4 March; when Wilson had arrived at the Capitol earlier that morning, Senator Robert M. La Follette was still successfully filibustering the Armed Ship Bill that would have given President Wilson the authority to arm merchant vessels in defense against German u-boat attacks. When the Sixty-Fourth Congress officially came to an end at the noon hour, so did the hopes for passage of the Armed Ship Bill. 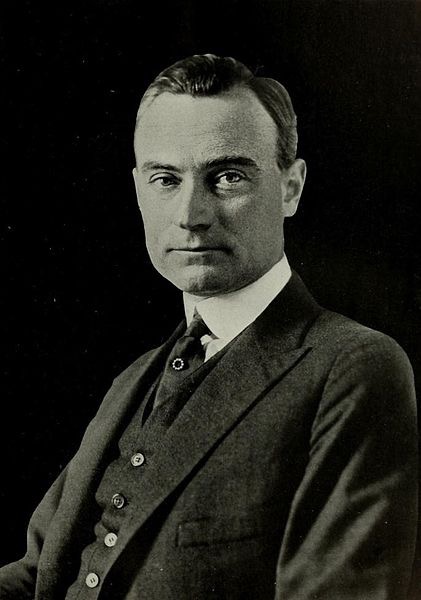 It had been a trying final week for Wilson On 1 March the Zimmerman Telegram had been made public to the American people. The German secret communiqué to Mexico with its offers of potentially reclaiming lands lost during the Mexican-American War fell on sympathetic ears, especially after the turmoil of the Mexican Revolution, subsequent occupation of Veracruz, and border skirmishes with Pancho Villa. The international scene was a tinderbox, and Wilson’s inaugural was understandably a grim one. Surprisingly he got a little help from an unexpected source, Mayor John Purroy Mitchel of New York City. Mitchel had been active in the Preparedness Movement with Leonard Wood, Theodore Roosevelt and other for some time and thus not a natural ally of Wilson’s. Still Mayor Mitchel reached out to the president on the day of the inaugural offering the administration the use of New York City’s civilian piers as well as full cooperation for use of the Brooklyn Navy Yard and other maritime facilities. Securing New York’s hundreds of miles of water and shorelines was of paramount importance.

(images/top, Library of Congress; bottom, the Brown Brothers for The World’s Work.)