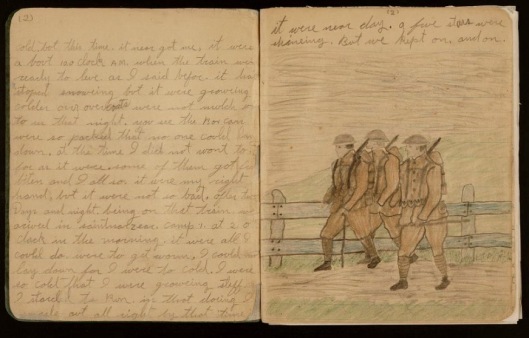 The Smithsonian digitized Horace Pippin’s notebook in the mid-2000s.

It’s a rainy Friday. I’m going to stay in a get some writing done. The academic year starts a week from today. Next week will be full of meetings and preparation. I had a meeting earlier this week with a faculty member in the English Department for a module we are doing this fall semester based on the World War One grant our library received from The Library of America and the Gilder Lehrman Institute. This past February The Library of America published World War I and America: Told By the Americans Who Lived It, an anthology edited by the Pulitzer Prize-winning biographer of Woodrow Wilson, A Scott Berg. We received a copy of the book as part of the grant. Over four class sessions students will first watch the film we are producing and then for homework read various passages from the LOA anthology. We are choosing a cross-section of fiction and non-fiction, as well as poetry and even some music by James Reese Europe. The lyrics to at least one song are included in the book. Students will read the lyrics and we will then listen to the song. We will then discuss how the war brought jazz to Europe and led to the Lost Generation in Paris and the Harlem Renaissance here at home.

When I was at the New-York Historical Society last week taking in the WW1 exhibit, I was touched to see that they had included a few works by Horace Pippin. The LOA anthology includes an excerpt from Pippin’s journal, which he composed immediately after the war. The students will read Pippin and learn about the Harlem Hellfighters. The LOA and Gilder Lehrman Institute provided a number of themes for exploration, to which we intend to hew closely. Why invent the wheel when someone has done it for you? At the end of the module students will write brief essays about what they learned and what they might like to know about moving forward. I think this is going to be a fun project.