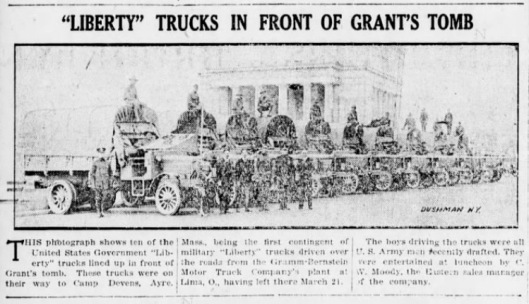 I wish the above image were less grainy but it is how it appears in the digitized edition of the 28 April 1918 Brooklyn Daily Eagle. For much of the year leading up to the taking of this picture, the Society of Automotive Engineers had worked exhaustively with the Quartermaster Corps’s Motor Transport Board to standardize a number of vehicles before putting them into mass production. The ones we see here are Standard B “Liberty” trucks. They were brought to Grant’s Tomb in late April 1918 to observe the anniversary of Ulysses S. Grant’s birthday, show the vehicles off, and demonstrate to the public how their Liberty Loan money was getting spent. When the war began most European armies were still using horse-drawn carriages. The United States experimented with trucks somewhat during the Punitive Expedition in Texas in 1916 but was also largely dependent on equestrian transport out in the field. Thus the need for the automotive industry and War Department to brainstorm in 1917-18 before putting the Standard B and other models into mass production. By early winter 1918 through the summer, dozens of factories were turning these and the other models out by the thousands every month.

In the same edition of the Brooklyn Daily Eagle in which this photograph appeared, there was an article stating that the automobile would become increasingly significant in American life after the war. That prediction proved prescient but it is nonetheless jarring to see, given that the United States had not yet fully engaged in the Great War and that the outcome was far from certain. In July 1919,, just one month after the Versailles Treaty, about 275 officers and men of the U.S. Army, including one Dwight D. Eisenhower, engaged in the first Transcontinental Motor Convoy from Washington D.C. to San Fransisco. The convoy’s mission was both to test the efficacy of moving men and material across such a distance and to advertise to the public and military/political leadership the significance of motorized transport.