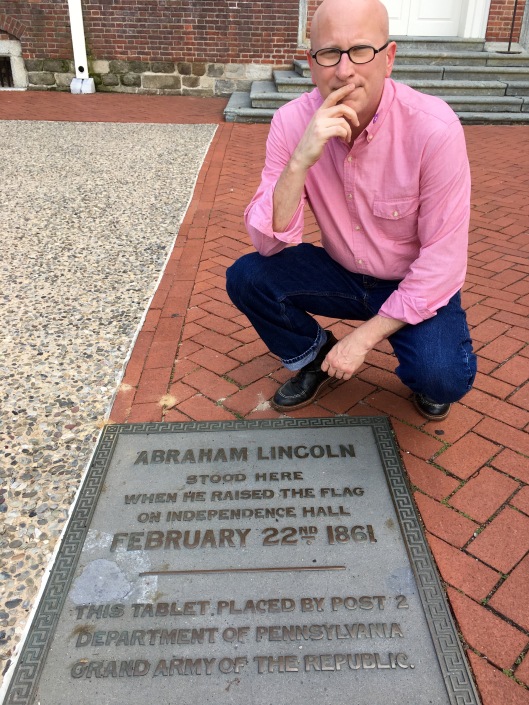 I am having my coffee getting ready to head out the door in a bit for my first day at Grant’s Tomb. Yesterday a friend and I took the bus to Philadelphia to visit the Museum of the American Revolution. The Revolutionary War period is something I know little about. My first experience visiting sites related to the period came a few years ago when my aunt and uncle took me to Lexington and Concord. It was an experience that has stayed with me. Of course we have a certain amount of Revolutionary War sites here in New York City as well, though the heritage tourism is less pronounced. Apparently the Museum of the American Revolution now stands on the site of what what used to be a visitor center for the nearby attractions.

The image of me above was taken yesterday outside of Independence Hall. If you look closely at the date, Lincoln’s visit fell on Washington’s Birthday 1861. This was while Lincoln was president-elect and on his way from Illinois to Washington for his inaugural. He was here in New York just a few days before this meeting with Edwin D. Morgan and others. Note that this tablet was put there by a Grand Army of the Republic post, though alas it does not give the year. A tablet next to this one mentions a John F. Kennedy visit to Independence Hall on July 4, 1962. We could not go into Independence Hall because tickets for the day were sold out but we weren’t too concerned because the museum was our main focus for the day. We did sit on an interpretive talk by park ranger of the adjacent Congress Hall. The ranger did a great job telling the audience about the significance of the hall and, among other things, about John Adams’s swearing in there as the second president.

I had an aunt who died about three years ago who lived in Greater Philadelphia. She loved visiting places like this and I’m sure over the years came here regularly with her elementary school students. There was a Boy Scout troop sitting in on the ranger talk and a group of young high schoolers in matching red t-shirts from Ohio in the museum. I love seeing the continuity and had to text my mother and tell her I was thinking of her older sister. Overall it made for a great day. We already have plans to visit again next year and take in the full experience. Now I’m off to the General Grant National Memorial. Enjoy your Sunday.