John Purroy Mitchel, New York’s boy mayor, died 100 years ago this coming July. Mitchel was in office from 1914-17, thus overlapping almost entirely with the early years of the Great War. Mitchel was a proponent of Preparedness and as such became a natural ally of Theodore Roosevelt, Leonard Wood, and others advocating for American readiness to join the fight. After Mitchel left office he joined the Army Air Service and was killed in Lake Charles, Louisiana when he fell out of an airplane during a training exercise in July 1918. Friends dedicated a memorial to him in Central Park near 90th Street and Fifth Avenue in November 1928. For years, especially throughout the 1930s and 1940s, the Mitchel monument was a focal point of Memorial Day commemorations in New York City. One regular attendee was Fiorello La Guardia, who over the course of his tenure in office from 1934-45 observed at least nine of twelve Memorial Days at the monument to his mayoral forerunner, Fusion Party associate, and fellow World War 1 aviator. 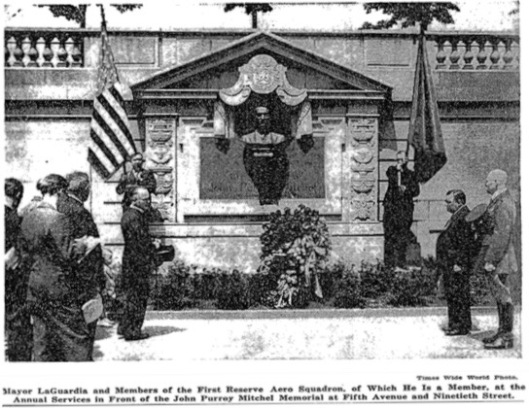 The photograph above shows La Guardia at the Mitchel monument on Memorial Day 1934. This would have been just over a year into the FDR Administration and with the Great Depression in full effect. This was also La Guardia’s first Memorial Day as mayor. There were still Civil War veterans marching in New York City’s Memorial Day parades in these years, about 25 this year. In the years after this their numbers dwindled into the single digits. 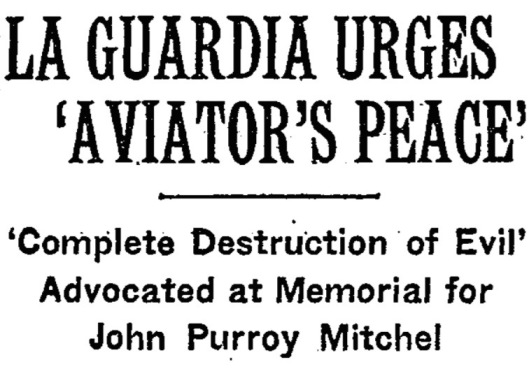 New York Times, May 31, 1944: La Guardia was pressing for full Axis surrender in the tense days before the Normandy Invasion.

The headline here in which La Guardia advocates for an “aviator’s peace” comes from the 1944 Memorial Day observation. While obviously the public did not know the exact day that the offensive to liberate France would begin, Memorial Day 1944 took place one week before D-Day. Thus we see La Guardia pressing for all out victory. Poignantly, 1944 also happened to be the first year that a Civil War veterans did not participate in Manhattan’s Memorial Day observation. Brooklyn and Queens each had one G.A.R. veteran in the ranks. Spanish-American War veterans, doughboys from the First World War now well into middle age, and active duty servicepersons including WACS, WAVES, and SPARS were all represented.

La Guardia was on hand again at the Mitchel memorial on Memorial Day 1945. He had gotten his “aviator’s peace,” at least in Europe. By Memorial Day 1945 V-E Day had passed and everyone was waiting anxiously to see what would happen in the Pacific.