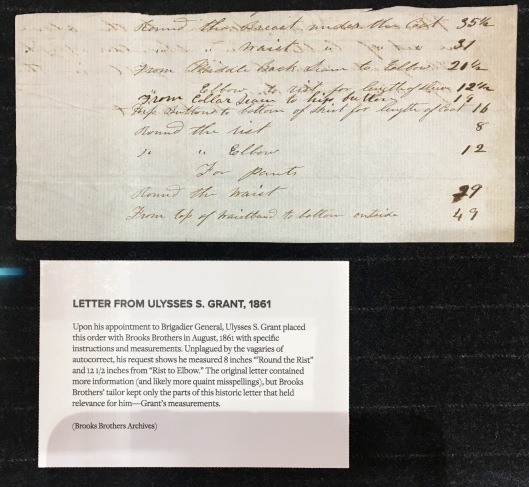 Ulyyses S. Grant sent his measurements to Brooks Brothers in August 1861 after being promoted to brigadier general. Oddly the tailors did not keep the entire note, instead only saving the portion describing the fit and proportions.

I’m listening to jazz and having my morning coffee before heading out the door for Grant’s Tomb. The sun seems to be shining. I thought we would stay with the Brooks Brothers theme one more day. What we see here is a letter in Ulysses S. Grant’s hand to Brooks Brothers giving his measurements. The letter is from August 1861 and is currently on display at the exhibition I mentioned yesterday at Grand Central Terminal. Grant learned of his promotion when he read about it in the St. Louis newspapers while stationed in the Western Theater. His rise had been meteoric. Grant left the Army in April 1854 and had seven full years in the wilderness before rejoining the military after the firing on Fort Sumter in April 1861. Now before the end of the summer he would be a brigadier general. Grant was never one for punctiliousness in military dress, he would famously wear an enlisted man’s blouse later in the war, but it must have been nice to order and put on this general’s uniform that we see here.