One of the most famous moments in American diplomatic history was the Viviani-Joffre Mission to the United States in April-May 1917. This was when the French politician René Viviani and Field Marshal Joseph Joffre, among others, came to America to discuss military and diplomatic details after the United States declared war on Germany that spring. Viviani, Joffre and officials from other Allied governments toured the entire United States for several weeks to meet the American people, many of whom, especially in the South and Midwest, were suspicious of European leaders’ intentions. Fifteen years earlier there was a lesser known diplomatic mission: the 1902 Rochambeau Delegation. 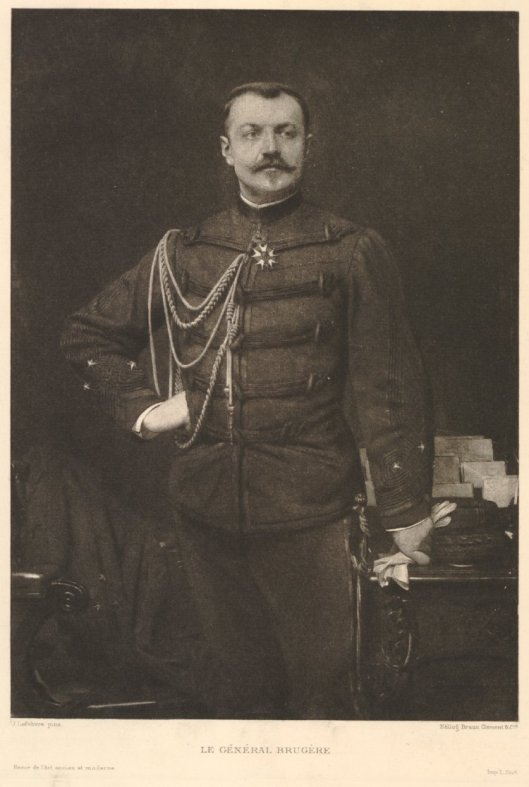 The British Museum acquired this painting of General Joseph Brugère in 1902, the same year this French military leader led a goodwill tour to the United States solidifying Franco-American relations. Many of the individuals involved would go on tour serve in the Great War.

The event was so-called because the central moment of the mission was the May 24, 1902 dedication in Washington D.C.’s Lafayette Park of a memorial to Jean-Baptiste-Donatien de Vimeur, Comte de Rochambeau, the French military leader who had fought with George Washington during the American Revolution. The early 1900s were an interesting moment in diplomatic relations. The United States had recently won the Spanish-American War and was becoming a true world power; the brutal Philippine Insurrection, the final phase in the Spanish-American War, ended on June 2, 1902. One month earlier, on May 6, General Joseph Brugère boarded Vice Admiral Ernest François Fournier’s Gaulois in Toulon and sailed for Washington. One of the driving forces of this mission was Horace Porter, the United States ambassador to France.

Porter had served under Ulysses S. Grant during the American Civil War and went on to serve in various capacities over the next several decades. He was the driving force to fund and build Grant’s Tomb, which finally came to fruition on April 27, 1897 when William McKinley dedicated his predecessor’s final resting place. Several weeks after that dedication Porter was off to Paris, where he would be President McKinley’s representative to France. Civil War veterans were still very much running American life; the president himself had been in the Battle of Antietam; his Secretary of State, John Hay, had been one of Lincoln’s personal secretaries; and right then in 1902 Secretary of War Elihu Root was putting Ambassador Porter in for the Congressional Medial of Honor for his actions at the Battle of Chickamauga.

Brugère, Fournier and a sizable contingent visited George Washington’s resting place at Mount Vernon on the afternoon of May 22 and were hosted that evening by Theodore Roosevelt at the White House. The big event came two days later when Ambassador Porter, President Roosevelt, General Brugère, Vice Admiral Fournier, scores of dignitaries, and thousands of others turned out at Lafayette Square Park for the Rochambeau statue dedication. Henry Cabot Lodge was the featured speaker. It was all a huge success.

A few days later the Brugère/Fournier contingent would be fêted across New York City. Among other things they got a look at the Brooklyn Navy Yard, dined with mayor Seth Low, and received a tour of Columbia University from college president Nicholas Murray Butler. Columbia is conveniently located next to Grant’s Tomb and on May 28 Ambassador Porter took Brugère, Fournier and the rest of the French delegates to the mausoleum that he had done so much to build. At the time the general public could not walk down to the sarcophagi as one can today. As leader of the Grant Monument Association however Porter was naturally able to take the Rochambeau delegates down the marble steps, where they all stood in hushed stillness for ten minutes. (At the time it was still only Ulysses; Julia passed away seven months later in December 1902.) After the visit, the delegation walked north of the tomb to the Claremont Inn, where several dozen people had a sumptuous meal.