I hope everyone is enjoying their three-day weekend. Whatever one does today, please remember the true spirit and meaning of Decoration/Memorial Day. 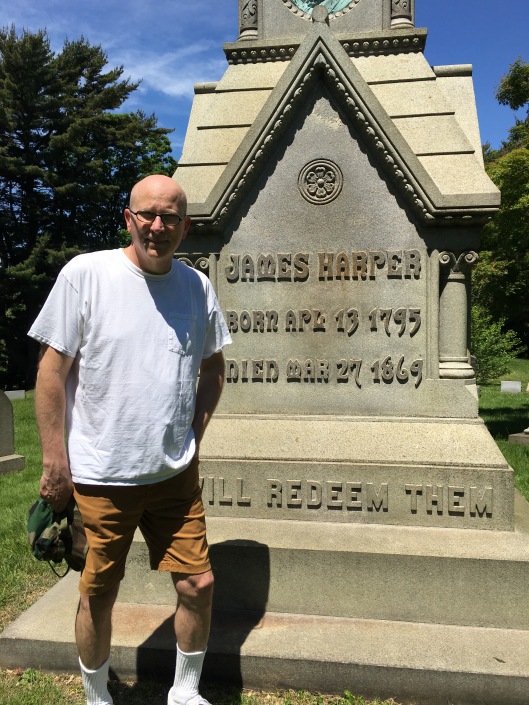 Harper Brothers headstone, Green-Wood Cemetery. James Harper, the oldest of the four, died as the result of a carriage accident in Central Park.

My friend and I had a good time in Green-Wood yesterday. While I don’t want to give away too much right now, we came up with what might be an interesting small summertime project. Over the course of the day, which we split in half with lunch to replenish ourselves and get out of the heat for a bit, we came across this headstone here. I found it striking and could not help but notice that the individual died in 1869, one hundred and fifty years ago. So, we stopped and took the pic you see here. It turns out that James Harper is none other than the oldest of the Harper Brothers, the siblings who two centuries ago founded the publishing empire that still exists today. Their father came to New York from Philadelphia around 1790 and opened a grocery store on Maiden Lane, which means he most certainly knew the Roosevelts, whose hardware concern was on that same Lower Manhattan street. Young James worked with Thurlow Weed for a time before founding J & J Harper in 1817 with his brother John. They brought younger siblings Joseph and Fletcher into the publishing business in the 1820s and eventually named the company Harper & Brothers. All are buried in this Green-Wood plot. Indeed, the other brothers are represented on the other three sides of this monument.

Brothers Fletcher, James (standing), John, and Joseph Harper founded the publishing empire that still bears their name. All are interred today on a quiet hill in Brooklyn’s Green-Wood Cemetery.

James Harper was a notorious anti-Catholic who in 1844 successfully ran for New York City mayor on the nativist American Republican ticket. He served one term. His administration is noted for something that did not happen within Manhattan itself. In 1844 nativist riots, sometimes called the Bible or Prayer Riots, took place in Philadelphia ninety miles away. Closer to home there was anti-Catholic in Brooklyn just across the water as well. The fighting there was especially intense, with pitched clashes between nativists and Irishmen. Brooklyn however was still an independent city, and thus beyond Mayor Harper’s jurisdiction. The Nativist Riots caused great concern. Thankfully the violence did not spread to Manhattan, in part because of the vigilance of Archbishop “Dagger John” Hughes. The pugnacious cleric met Mayor Harper and warned him in stiff language of potential consequences should goons attack people or churches. James wisely left politics after his one term in office and focused again on the family publishing business, which only grew in the ensuing decades. The brothers’ most important vehicle was of course Harper’s Weekly, which made its debut in 1857.