I hope everyone’s summer is going well. I know I have gotten away from the blog a bit but I have been doing some summer things. I have also been trying to finish a book chapter about Eleanor Roosevelt. It is almost done and I’ll turn it in to the editor sometime later in the week. It proved a little difficult to manage because when I stated at Federal Hall n early June I pivoted heavily to the Early American Period. I have no regrets and have learned a great deal. It has given me a more holistic understanding of American History, especially as I try to make sense of our own historical moment. Still, it has been a bit difficult moving from one era back to the other. 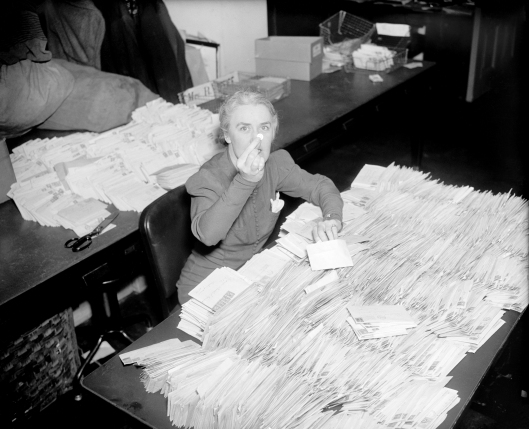 Missy LeHand holds up a dime given in the fight to find a cure for infantile paralysis, January 28, 1938

I did want to make certain to pause and remember one of the most important figures of the Roosevelt Era: Marguerite Alice “Missy” LeHand, who died on this day seventy-five years ago in 1944. Ms. LeHand was born in Potsdam, New York and grew up in the working-class Boston suburb of Somerville. She entered the Roosevelts’ world in her mid-20s around the time Franklin ran unsuccessfully for the Vice Presidency in 1920. Marguerite stayed on and proved invaluable after Franklin contracted polio in August 1921; while Roosevelt was seeking in vain for a cure that would never come, Ms. LeHand worked on his behalf. She was part of the inner circle, hanging out on the houseboat in Florida and settling in to her own room at Warm Springs. Ms. LeHand was a charter member of Roosevelt’s Cuff Links Gang, the small circle of early advisors during that Vice Presidential run to whom he each gave a set of gold cufflinks with his initials engraved on one and the recipient’s engraved on the other. Technically she was his secretary but she was so much more than that; when Roosevelt assumed the presidency she was for all intents and purposes the White House chief-of-staff. Had she been a man more people would have appreciated the role she played in his administration.Throughout the long administration others came and went; Marguerite LeHand stayed.

She suffered a debilitatingly stroke in 1941 just as the United States was on the verge of entering the war. FDR had little time to attend to Ms. LeHand as much as he would have liked, but he and Eleanor did make sure her needs were taken care of. She convalesced n the White House but after starting a fire with a cigarette and burning herself significantly she was sent back to Massachusetts. Eleanor Roosevelt, Felix Frankfurter, James A. Farley, and Joe Kennedy were just a few who attended her funeral.

(photograph by Harris & Ewing via Library of Congress)