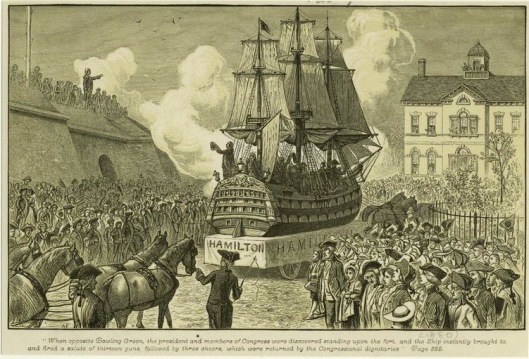 In the manuscript of Incorporating New York, the book I have been writing about Civil War Era New York, I mention the July 26, 1788 New York State ratification of the U.S. Consecution. Isaac Roosevelt joined other Federalists such as Alexander Hamilton, John Jay and others in voting for the Constitution’s passage. Until this past Friday when at the New-York Historical Society, I had not heard of the Grand Procession that took place in New York City on July 23, 1788 in support of the Constitution. New York’s was not the first such procession; other locales had held them previously, some of them large, such as Philadelphia’s on July 4. New York had intended to hold its procession weeks earlier but the thing kept getting pushed back. By the time the procession rolled along on July 23 ten states had ratified the Constitution, one more than need to make it legally binding. Still, there was the significant issue of whether or not New York would join the republic.

The image we see here is from a mid-nineteenth century history book and is not entirely accurate, though they did pull a frigate called the Hamilton through the streets during the procession. We see it here passing through Bowling Green. On the left one can see the fence that is still there. On the left is Fort George, which was torn down in 1790. Cass Gilbert’s 1907 Hamilton Custom House, now home to the Smithsonian’s National Museum of the American Indian, is there today. What I do not understand is the caption where it mentions the president and legislators watching from atop the fort. The First Congress would not sit, and Washington would not be sworn in as president, until April 1789. Perhaps these are the re-enactors of their time? Or maybe a projection to show what could be if New York ratifies? I do not know.

New York ratification of the Constitution was no sure thing. That is why things were dragging out for several weeks at the meeting in Poughkeepsie. This is an extraordinary moment in both New York and American history

(engraving/History of the City of New York: Its Origin, Rise, and Progress, Volume II via NYPL)