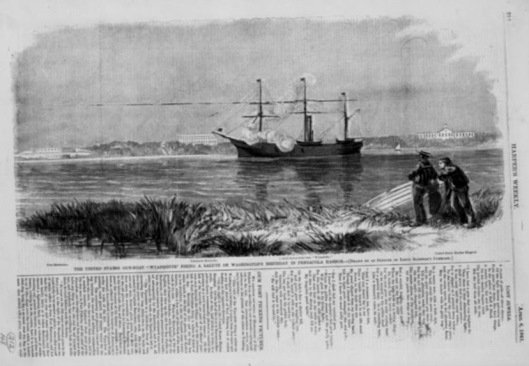 April 6, 1861 Harper’s Weekly woodcut of the USS Wyandotte firing a salute in Pensacola Bay on February 22 in commemoration of George Washington’s birthday.

I am having my coffee before jumping in the shower and heading to Federal Hall in a short bit. Here is an image I intend to share today when discussing the history and evolution of George Washington’s Birthday. It is the original USS Wyandotte. Built in 1853 and christened the USS Western Port, the steamer saw action in South America and served in the Caribbean suppressing the slave trade prior to the Civil War. The image we see here depicts the Wyandotte in Pensacola Bay firing a salute to George Washington on February 22, 1861. This very same day President-elect Lincoln was in Philadelphia at Independence Hall marking Washington’s Birthday and raising a flag with an additional star on it in tribute to Kansas becoming a new state. He was on the train journey that was taking him from Illinois to Washington for his March 4 inaugural. It was an anxious time. Earlier this very month Jefferson Davis had been named Provisional President of the Confederacy and had spoken in Montgomery, Alabama on February 18 laying out the cause for secession.