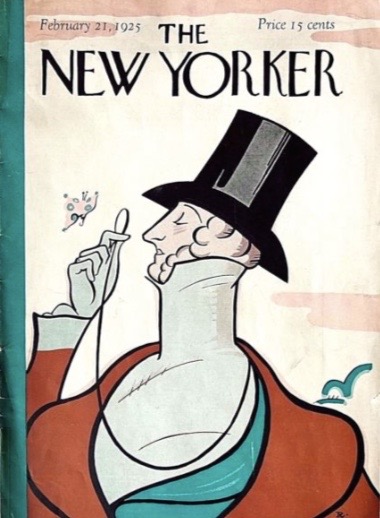 I have a friend who is working on a book manuscript that hopefully will see the light of day in a few short years. I don’t want to go too much into the details here because it is literally not my story to tell. I will say though that his narrative is about the history and evolution of New York City and that he is toiling away diligently on an under-explored aspect of the city’s development. My friend emailed the other day and asked if I could provide a rough outline of American society in the 1910s and 1920s to fill out the story and provide some context for his topic. I offered a few ideas, among them the Versailles Treaty and League of Nations; the influenza pandemic; Prohibition and related rise of organized crime; the Red Scare; the Great Mississippi Flood of 1927. All in all pretty basic stuff. Another topic I added was the rise of magazines during the Roaring Twenties. For instance Henry Luce started Time in 1923 and Harold Ross edited and published the first issue of The New Yorker on February 21, 1925, ninety-five years ago today.

Journalsim has been ht hard in recent years by changes in information technology and other forces. Local newspapers are ceasing publication more than ever. I am old enough to remember when a subscription to Time magazine meant one was up on, well, the times. That magazine today is a shell of its former self. The New Yorker however has restored its footing in recent years after the magazine’s identity crisis during the best-forgotten Tina Brown years. Just yesterday I emailed three people “With the Beatles,” a short story by Haruki Murakami published in the current New Yorker issue. It is an extraordinary tale of loss and memory. My point really is that the magazine remains relevant for both its cultural and journalistic contributions.

I remember reading Nat Hentoff’s memoir many years ago in which he spoke of his admiration for longtime New Yorker chief William Shawn. Hentoff’s admiration of Shawn’s instincts and erudition was dampened only by his disappointment in the editor’s treatment of the staff, especially the non-writing staff, whom apparently Shawn was perpetually nickel-and-diming while hiding always behind a veneer of civility. I remember in the late 1990s–now so long ago–just a few years after Shawn’s 1992 death when a spate of memoir/biographies, laudatory and otherwise, came forth to praise and bury the man. I never read any of them, because literary feuds and gossip are two things I am not interested in.

Good journalism is time-consuming and expensive, which is often lost on us today when we log online each morning and surf the internet for free. We expect it to be free. It is that very reason why journalism is in such trouble today. Valuing journalism is something to think about in our current historical moment when there are people eager and willing to take the truth away from us. The 95th anniversary of The New Yorker is an opportune moment to ponder how good writing and reporting is produced, and how costly that production is. Whatever news and cultural sources you consume, consider throwing them a few shakels via a print and/or digital subscription in order for them to continue their important work.