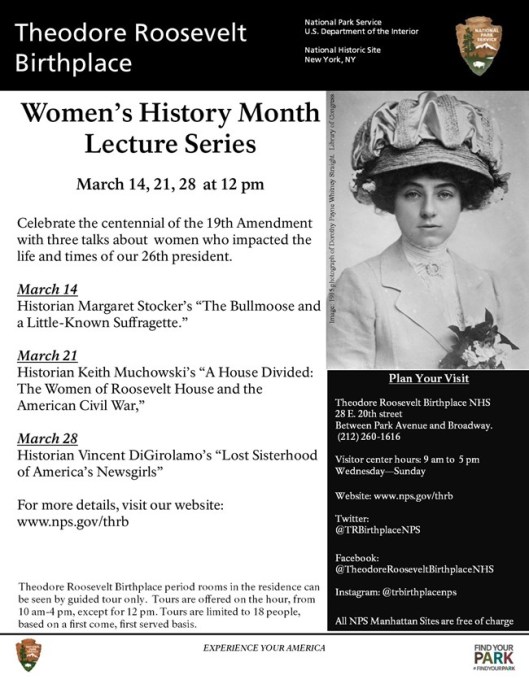 If you are looking for something to do in recognition of Women’s History Month in the coming weeks I might suggest the above programs at the Theodore Roosevelt Birthplace on these successive Saturdays. A guy with my initials even goes off on the 21st.

These past few weeks I have been pulling together my presentation, which focuses on the Roosevelt family’s response to the American Civil War. Young Teedie’s parents supported different sides during the conflict. His mother Mittie was a Georgia belle from a slave-owning family with a brother and several half-brothers in Confederate uniform; Theodore Roosevelt Sr. was a Union man, a friend of Abraham Lincoln’s personal secretary John Hay, who had his mail sent to the White House in care of Hay while out in the field registering men of the Army of the Potomac up for the allotment of their pay to their families back home. I tell the story in more detail in the manuscript of “Incorporating New York,” my history of Civil War Era New York City that will hopefully get published sometime in the future.

There is a rich assortment of speakers lined up for the house on East 20th Street in the coming weeks. Come out and take part in Women’s History Month in these waning days of winter.