Friday morning I was out and about taking photographs in Brooklyn’s Cadman Plaza for a class I will be co-teaching this coming spring semester. This is the first for-credit class I will be teaching and I am nervous and invigorated at the same time. Over the semester the students will be documenting a New York City locale; after some discussion my colleague and I chose Cadman Plaza. It is rife with interpretive possibilities. I have always known a fair amount about the area and am now boning up to bring myself up to full speed. I will talk about it here and there over the course of the term. 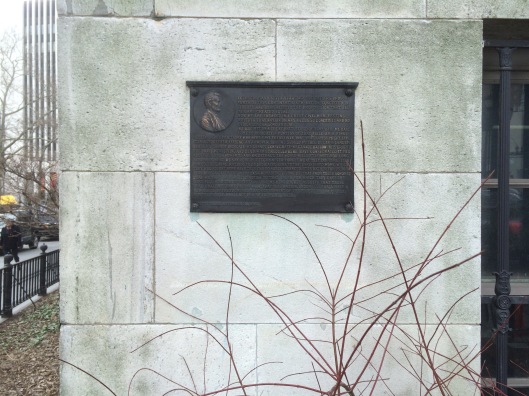 Here are two of the approximately twenty images I took the other day. This first one in on the north-facing wall of Borough Hall. It is hard to make out–my little phone camera will only do so much–but it is the Lincoln penny along with the full Gettysburg Address. When I first saw the tablet the other day–and I walked past it for years without ever noticing it–I figured the plaque was placed in either 1909 (centennial of Lincoln’s birth) or 1963 (centennial of the Gettysburg Address). With a little digging I learned via the Catalogue of the Works of Art Belonging to the City of New York, Volume 1 that the City of New York commissioned the 22″ x 28″ tablet from artist Victor D. Brenner for dedication in 1909. That is the year the Lincoln penny made its debut as well.

Communities large and small erected such works throughout that year to commemorate Lincoln’s 100th. President Roosevelt had commissioned Brenner to design the Lincoln penny a few years previously. Of course Roosevelt’s father was an acquaintance of Lincoln’s and a good friend of his personal secretary John Hay. Roosevelt always had an interest in coinage and medallic arts; TR was a good friend and patron of Augustus Saint-Gaudens as well. Downtown Brooklyn was doing poorly in these years, in large part due to the elevated train line that blighted the neighborhood and the new subway line that took commercial and residential traffic to other parts of the borough. Urban renewal efforts were in the works, but the onset of the Great War brought those plans to an end. I would go further into the story here, but that’s for the students to do this winter. I’m eager to see how the class goes.

The plaque and hall from a distance. The tablet is in the lower left corner above the white car.