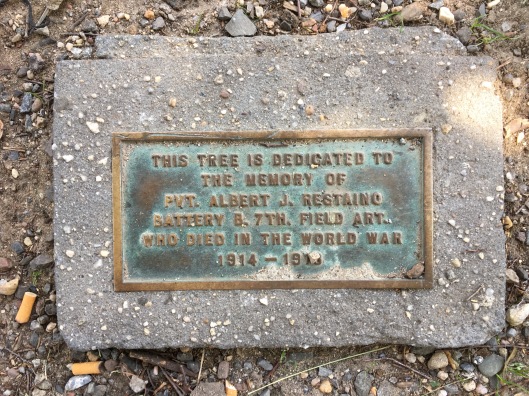 Though his tablet is incorrect, Restaino’s tree has fully grown.

I wrote about six months ago about the tress along Eastern Parkway dedicated to Brooklyn boys who had died in the Great War. For my Grand Army Plaza tour I wanted to do a deeper dive and discuss a few of the men. So I did a little digging. Here we have a tablet laid for one “Albert J. Restaino.” When I began checking I discovered sadly that this is an error. The solder is actually Alfred Restaino. Here is the card with his personal information. He was wounded and subsequently died of pneumonia. Note that under Person Notified of Death it lists “Mrs. Restaino–Mother.”

Restaino is on the far right in the second row from the top.

The story only gets more interesting. I wanted to know where Restaino was buried. I never found his final resting place, but did discover that he indeed returned to the United States. In 1920 they held the Summer Olympics in Antwerp in a gesture for all that Poor Little Belgium had suffered during the Great War. In doing an Ancestry search for when or if Restaino came home, Restaino arrived in the United States on the US Army Transport Ship Sherman in September 1920, almost two years after the Armistice. That led me to the Brooklyn Daily Eagle, in which I searched for any articles about the Sherman published that September. That led incredibly to an article describing the return of the U.S. Olympic Team coming back on the Sherman with the remains of 763 doughboys.

Here is the documentation of Restaino’s return on the Sherman, 11 September 1920.

and an excerpt from the 12 September 1920 Brooklyn Daily Eagle article in which an Olympian describes the journey home.

Stories like this are why monuments and memorials are as poignant as they are.