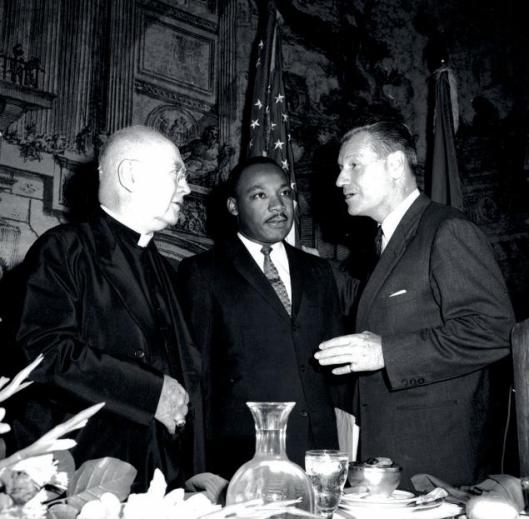 It is hard to believe it was almost 1 1/2 years ago that I posted about our trip to the Schomburg in Harlem to see Lincoln’s handwritten draft of the Emancipation Proclamation along with the official Preliminary EP. That and being in Gettysburg late last June have been my highlights of the sesquicentennial, so far. In that September 2012 post, I mentioned that also on display was a typewritten excerpt from a September 1962 speech given by Martin Luther King, Jr. to the New York State Civil War Centennial Commission. I vividly remember seeing the many cross-outs and red ink on the King draft.

Well, incredibly, officials at the New York State Museum in Albany recently turned up an audio version of that speech that no one knew existed. Here it is, released by the museum two days ago on MLK Day:

It does not take much to understand the influence of the Civil War Centennial on the Civil Rights Movement. King was giving this speech during the desegregation crisis at Ole Miss over the enrollment of James Meredith.

In attendance at that dinner were Bruce Catton, Chairman of the Commission, and Governor Nelson Rockefeller. The New York State Commission did some good things, but unfortunately did not make it through the Centennial. The state legislature pulled the funding in 1963 and the group disbanded in March of that year. Thankfully we have now have their recording of one of their most important endeavors.